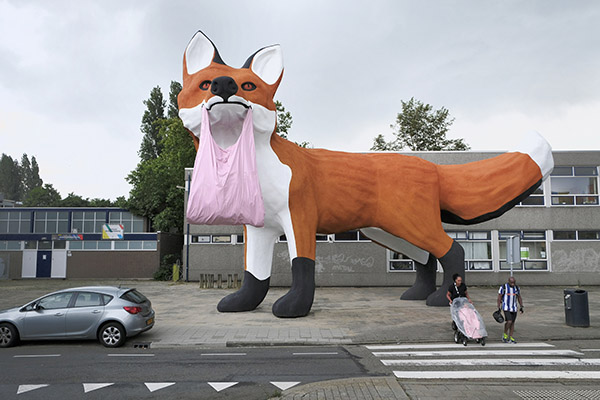 Florentijn Hofman is a visual essayist, he makes artworks that can be considered as three-dimensional essays. As a written variant, essays are one of the most interesting forms of text, a non-fiction with a personal touch that is built up with a certain grace, beauty, lightness and preferably humor. Lightness is needed for a pleasant entry into the story, from which you are guided to a stratification that is open to interpretations. Hofman's narrative images contain all those ingredients.

The same goes for his Bospoldervos, the sixteen-meter-long fox with a bag in the mouth, which he designed for the Schiedamseweg in Bospolder Tussendijken. In this part of the city foxes are not fiction, they are spotted in the evening, looking for rabbits in the Dakpark or perhaps for the remains of the market in the Grote Visserijstraat - although the latter is an interpretation of the artist. With his fox he wanted to make a picture about how nature works its way through the city in suburban urban areas under the metro lane. And although nature is not directly of economic importance, it contributes to our well-being. Townspeople, or they, too, long for it.

With this giant fox, Hofman presents a collision between two worlds: city and nature. The fox is an intruder, a colorful and graceful nocturnal creature that gives a romantic twist to this story, and romance is a desire that newcomers to the city know. Rotterdam consists largely of people who come from elsewhere and who, just like the fox, seek refuge there. The point is that as a city you have to keep your gates open: for nature, for newcomers, for other perspectives. For Hofman, whose body of work consists of animals that, just like in fables, have recognizable human traits, the fox is an intelligent and cunning animal that takes calculated risks. It is not for nothing that it is on the raw and least rake side of the Schiedamseweg, with a vigilant attitude. This vigilance reflects the dynamics that we identify with metropolitanism, especially at this location full of traffic, that functions as a gateway to the city.

The fox is streetwise and knows how to adapt. In Rotterdam West that is an important characteristic, Hofman says, who lived and worked there for years. Similar to the fox is the equally huge bear, the Staalman, which he designed years ago for the Staalmanbuurt in Amsterdam West. Because life is not easy there either, he put a bear there that is sturdy and sturdy on two legs. In a fable it would go together with this fox.

In that sense, the story of this fox, not caught in the headlights but alert, is about life in a city and about being open to the unexpected. But that happens without a story actually unfolding linearly from start to finish. Such interpretations are up to the viewer, who may or may not see the same as what the artist wanted to place in the creation. Essay, literally trial, is a text form for which there are no rules. Nor do they exist for visual arts. 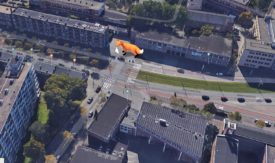 Hofman came to this design in two ways. The first is the so-urban designation of this urban district - a combination of forest, polder, dikes. It reminds of an invisible past. Fifty years ago the Situationists said that the beach is under the sidewalk, here the polder is under the sidewalk. The second way was to study the Schiedamseweg in more detail. The question for him and three other artists was to make a design for this busy street in competition. Hofman found many parts to be too busy, too narrow or too finished, so that the Delfshaven side in particular fell off. But the other end, towards Marconiplein, could use a gesture. In that part nature enters the city, there is also the market of the Grote Visserijstraat with all the plastic bags that blow around. The intrusion of the fox as well as the ban on plastic bags were messages that played back at the time that Hofman started his design. That is an ode to both: nature and the plastic bag. Earlier Hofman had made giant snails with 10.000 bags as skin, people started stroking it - you can love it. He gave the fox a plastic bag in the mouth that makes you wonder what's inside. Did that fox steal the bag? Is he going to clean up junk? Or did he do the shopping? Because of that unexplained addition, it tells an unambiguous story, just as it is a absurd appearance along the street.

In addition to the content, the image also plays a spatial role. The fox is placed in the longitudinal direction so that it defines the sight axes more, whether you look towards the snout or from the tail. You can hide under it, children can play between the legs. It does not stand on the nicest part of the road: it sometimes feels uncooperative and partly too spacious. This is an advantage for the artwork. This nocturnal animal on its velvet legs does not belong in a park, but rather sneaks along the shadow sides of the city. With its rolling shapes and bright vital color, it contrasts with the gray and angular architecture behind it, so that the environment and the image reinforce each other.

The story of the fox is therefore in several aspects, such as color, shape, positioning and of course scale. It is a giant fox and that makes it a surreal appearance, as if it belongs in another parallel universe. Crystallized from this in our reality, the animal looks tense, or at least attentive, just as passers-by will look crazy when they turn the corner and suddenly face a creature from a world that does not seem to exist here .

Due to its dimensions and color, the fox provides visibility and marks the way. This is important in an increased visual culture in which visibility is also essential for urban districts to claim the right to exist and to be on the relevant political and social agendas. Sixteen meters in length also means a complex construction. The skeleton was built in a shed in The Hague, and in Rotterdam on the Marconist strip the sprayed concrete is added. The artist wanted to carry out the second phase close to the location so that local residents, who voted at the time, see this design, idea and practice take shape. For more involvement and mutual connection, he wants to finish it on the spot and thereby present background information and scale models.

For Hofman, this fox is an important image in his oeuvre, especially now that he is on the eve of major plans in Asia. Since his giant duckling was traveling around, an inflatable image about consumption and reproducibility, he has had commissions and exhibitions there of a scale that is unprecedented in the Netherlands. But Rotterdam is where he comes from and where his career began to a large extent. Under the name Beukelsblauw, he painted dozens of demolition buildings on Beukelsdijk light blue in 2005, as a blue screen to project future architecture imaginary. The sky-blue color announced the disappearance of the old buildings and the hole that would turn blue like the sky. At the same time, the striking color accentuated all the beautiful details of the 19th-century carved facades, as a final tribute. Hofman wants to get out of every assignment what is not seen but what does exist. In a project around the N470 north of the city, he had a zeppelin fly in 2007, in which local residents saw the provincial road from above. It showed them how the road affected the landscape, how the newest residential area was there, how in short their living environment was changed in its entirety. It offered them a new perspective, literally and figuratively.

Just like the Feestaardvarken in Arnhem and the Staalman in Amsterdam, the Bospoldervos is an important image for Hofman, which he strongly believes in. All three are the magnified humorous animals on his Hofmans, which often means that people are struck with dumbness - many passers-by do not expect to find a huge aardvark around the corner of a street. Its humor has a disarming effect. How is it that the scale that is reserved for architecture and infrastructure in a city has suddenly been taken up by such a bizarre appearance? The images form a surrealism of format, literally and figuratively. As a result, Hofman's images become meeting places and discussion material in one. They ensure being together, connectedness between residents, contact. The conversations that arise from this naturally concern the public space in question and stimulate people to take a better look at their surroundings.

The fact that Hofman chooses animals to get the conversation going is because mythical animals are a narrative tradition that you find everywhere in the world like cities, and that, like cities, transcend generations and tribes. They are hidden messengers: we accept and recognize more from an animal character than from a person who too soon is an individual, another, not ourselves. Animal characters - on paper or as an image - seem easily readable and recognizable, but are still driven as fictional creatures by motives and instincts that are strange to us. As a result, they retain a mystery, and Hofman's animals, too, are never really tangible.

With all these characteristics, the fox is a work of art that Hofman believes will be seen together with Bospolder Tussendijken, as large, iconic and desirable as the image looks. And so he is an essayist artist, who sketches a story with an open end, the meaning of which must reveal itself in the future in the interpretations of city dwellers who may recognize themselves in this fox, and, hopefully, embrace it.