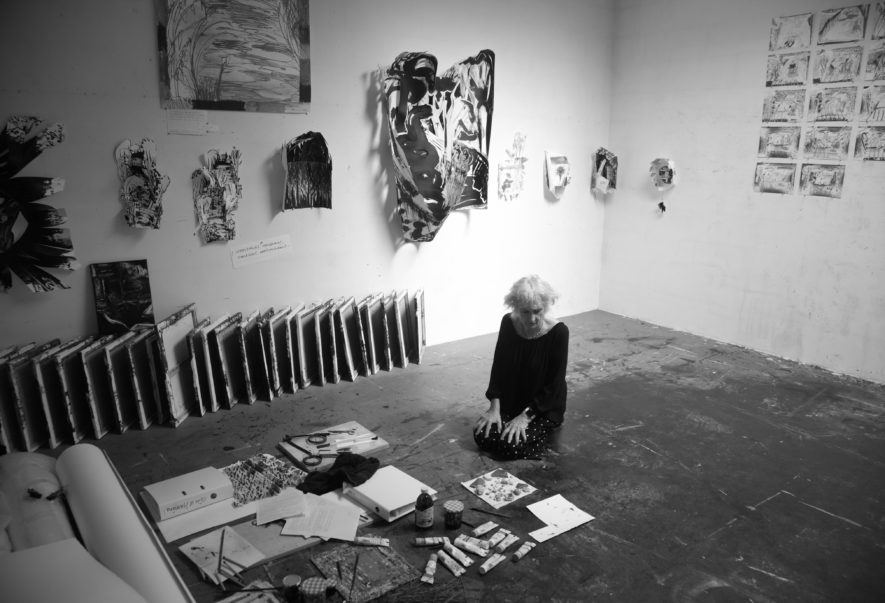 If it ever happens, you will be amazed by what you know.

On the bicycle along the Schaardijk along the Nieuwe Maas there is a nice trip to the studio of Marjolijn van den Assem, which, together with her husband's house and architect's office, is located in a barely noticeable tight box above the river. Once inside, I am surrounded with beautiful vistas and special artworks. On the indoor bridge to her workspace, Van den Assem draws my attention to a beautiful little painting. She painted it when she was 11 years old. It is the start of a conversation that takes us from misunderstood desires through Friedrich Nietzsche to one twig.

Marjolijn van den Assem (Rotterdam, 1947) has been one of the best in Dutch drawing for decades. Her work can be seen in many places at home and abroad and has also been included in many collections. As is often the case, however, this did not go without a hitch. “In my youth I was extremely shy for a while and felt misunderstood. I identified with artists and poets, but found no resonance with my environment. My father had his own company and so his ideas about the future of his children. Naturally, being an artist didn't fit in at all, at most as a fun hobby. From Emmen, where I had moved with my parents at a young age, I went back to Rotterdam to do the Academy there. In the end I did not finish it, because I was expecting our daughter and as a result I suddenly felt ten years older than the rest of my academy class ”.

Van den Assem can hardly remember anything from the earliest years as a professional artist ("I think you're born as an artist!"). “That is a blind spot. I do remember that I had an exhibition at Albert Waalkens in Finsterwolde (1978) and in the Groninger Museum (1981, 6 Dutch artists in the Mohr-Mathon collection). An article by Hans Vogels on the subject of fundamental drawing appeared in the Volkskrant. "At that moment I realized that I was being seen".

Van den Assem calls the meeting with Josine de Bruyn Kops (1940-1987), who was director of Museum Gouda of 1976-1986, a decisive event in her artistic career. “The meeting with her and later also with Liesbeth Brandt Corstius, their mutual support and incentive have been very important to me. My way of working was then very monomaniacal and withdrawn, it was my way of survival. De Bruyn Kops and Brandt Corstius gave me solo exhibitions in their museums in Gouda and Arnhem because they felt that my work should be seen in the outside world, that they thought that it could also be encouraging for other female artists! ”

Van den Assem was already busy with work that resulted from her intense interest in the work of the philosopher Friedrich Nietzsche. “I fought in the work of Nietzsche and gained a lot of self-confidence. But I didn't tell anyone about that, after all, that wasn't a job for me but an inescapability, the only way to get my brain going.
From the artist John van 't Slot I received a not yet opened copy of Ecce Homo, that I cut open page by page and 'conquered', it became my favorite Nietzsche book.

After that, I started to read Nietzsche's entire oeuvre in a highly disciplined way, as well as many interpretations of it, even when I sometimes did not understand much about it. However, a good friend and guide, who was important to me at the time, said: If it ever happens, you will be amazed by what you know. "

So Marjolijn van den Assem came around the age of 30 on the trail of Nietzsche and began to travel after the journeys he made and the places where he worked. A few years after the fall of the Wall, while traveling through eastern Germany, she arrived in Naumburg (an der Saale), a town in a deplorable state. A letter with the message that a Nietzsche Gesellschaft would be established, including the address of the founders, was attached to the expired Nietzsche-Haus. “When I got home, I wrote a letter that I would like to become a member and added the German marks we had from our vacation as a down payment. Never heard anything again, until about ten years later I received a pass like member.
Again years later I was called by Paul van Tongeren (Nietzsche Research Group, Nijmegen) who was asked by the director of the Nietzsche Documentation Center Naumburg to mediate for a solo exhibition there.

It appears that now you get space available, but nothing else is arranged, no transport, no scaffolding, no assistance, no fee. You see that more and more, also in museums, everyone is paid, except the artist. The artist is often pinched, the child of the bill. Unfortunately, you cannot live off your artistry, despite good sales and stipends on a regular basis.

I jumped a hole in the sky! I was more or less instructed to make a work especially for a space six meters high. But I rarely do commissioned work, it does not fit with my method. Fortunately, Jisca Bijlsma (now director of Chabot Museum, Rotterdam) knew my curator for this exhibition Seelenbriefe, to convince me that I would succeed in this special case. I then retired to my studio and created a work that eventually received a place of honor alongside the bust of Nietzsche, I am still very proud of that. I made small drawings on a roll of ten meters, which gradually became more spatial, at the end they literally crawled out of that roll. ”

Van den Assem leads me through her studio and tells about an exhibition that she is currently working on, Big Art in the Bijlmer bajes (2018). She wants to show the monumental work she showed in Naumburg in a gym, but as she talks about it, her irritation increases. “I am increasingly called upon to protect my profession. It appears that you now have space available, but nothing else is arranged, no transport, no scaffolding, no assistance, no fee. You see that more and more, also in museums, everyone is paid, except the artist. The artist is often pinched, the child of the bill. Unfortunately, you cannot live off your artistry, despite good sales and stipends on a regular basis.
Fortunately I still have my 'work of the month', my own material fund on my blog, with which I can buy materials from Harolds every month from the proceeds. Marjolijn is commercial, colleagues say, yes, thankfully, because that means I can continue working and don't have to take out loans that I have to pay back later. "

Marjolijn van den Assem has learned to use her voice. For example, she is one of the few of her generation who is very active on social networks and has her own blog on which she regularly posts and shares her views. “As an artist, you have to have character to sustain you in life. Many people say that I am so nice and cooperative, but in the meantime I am also one because of all the experiences twig when necessary. So in the end I became an adult. "

The Hendrik Chabot Prize is a triennial Dutch art prize for visual artists who live or work in the Rotterdam region or who have a close relationship with the city. This oeuvre prize was established in 1965 by the Prins Bernhard Cultuurfonds and is now in the hands of the Chabot Museum. An amount of € 10.000 is attached to the Hendrik Chabot prize.

From the jury report:
“The jury of the Chabot Prize 2019 has unanimously decided to reward Marjolijn van den Assem for the profound, uncompromising, always sparkling way of life in which they use the language and thoughts of one of the greatest thinkers of the nineteenth century (Friedrich Nietzsche, ed.) transforms into a completely unique and quirky visual oeuvre. ”The jury of the Hendrik Chabot Prize 2019 consists of:
Woody van Amen
Lucette ter Borg
Inge de Bruin-Heijn (chairman)
Deirdre Carasso
Siebe Thissen

On December 6 2019 the prize will be awarded by Mayor Ahmed Aboutaleb in the citizen room of the Rotterdam City Hall.