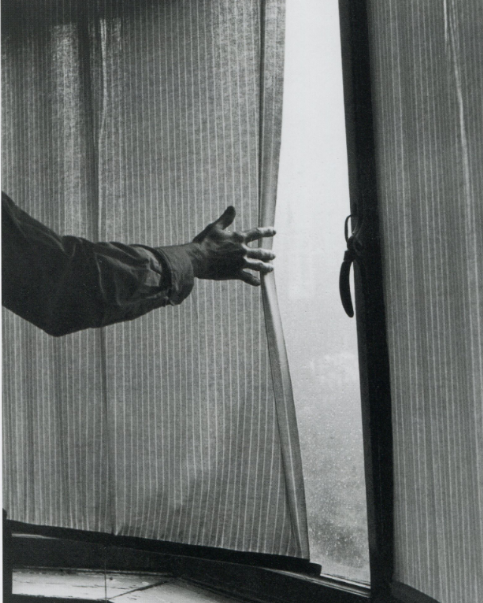 Curtain
Curtain was made in 1993 by Helena van der Kraan (1940), commissioned by the then corporation / foundation Onze Woning. This is a painting of her photo Curtain (1991), meticulously (after) painted by Atelier Leo Mineur (commissioned by the maker). Van der Kraan is a renowned photographer. In 1968, Van der Kraan fled from her native Czechoslovakia to the Netherlands, where she was admitted to the Haarlem post-academic art course Ateliers' 63. In 1970 she bought her first camera, with which she photographed the performances of her husband, visual artist Axel van de Kraan. In the years that followed, photography became her medium. She prefers to work in black and white. She also experiments with various photographic techniques, such as gum printing and printing photos on canvas. She still photographs analogously and makes her prints with her own hand. A large part of her oeuvre consists of self-portraits or portraits of people from her immediate surroundings. In her photographed still lifes from the seventies and eighties, everyday objects in and around her house are the subject. They are traces of her daily life: an empty coffee mug in a niche, dishes in a bowl or the cat on the table. In Curtain we see a hand that moves the curtain a little to one side, as if someone is secretly trying to look outside. The painting has been restored in 2019 and applied to a new blue painted facade (thanks to Woonbron).
Read more

The List
The List (2002) van Cor Kraat has recently been restored. Cor Kraat initially made this painting in 1980 in a classic ornament frame above restaurant De Lijst. In 1988, after the block was demolished, the work was placed on the opposite side of the street, above the De Pui café. In 2000 the work had to disappear and was given a new place at the current location.

Recently, the artwork and the frame appeared to be irreparably damaged by moisture after years. BKOR commissioned Willem Kerssemeijer from Atelier Leo Mineur to recreate the painting and Vorm & Decor to construct the frame in a sustainable way. In the summer The List delivered again. Thanks to Woonstad Rotterdam for making the facade available.
Read more