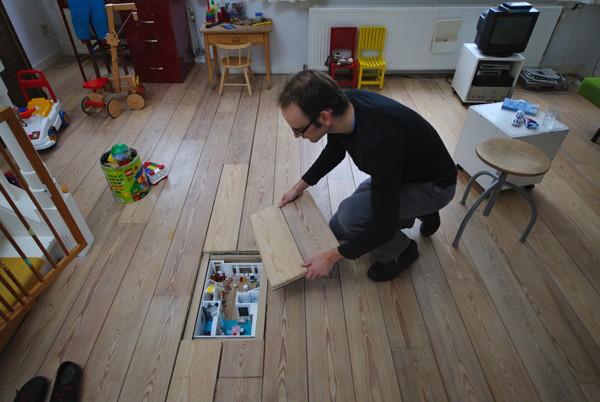 28 March Robin van 't Haar died, visual artist and since 2011 teacher visual arts at the Willem de Kooning Academy. Robin had a special interest in public space. That fascination was expressed in a number of interventions that he did on behalf of BKOR. His method can be summarized in the notion City Scripts: every public space is based on an unwritten script that requires people to behave in a certain way. His 'method' gave us more insight into the way in which people use public space. One of his most interesting projects was Passage. In 2004, city newspapers such as Metro en Rush hour rise. They were generally distributed free of charge in train and metro stations by young employees in a Metro or Spitscoat. Robin intervened in that urban pattern. In memory of this Rotterdam artist, CBK Rotterdam publishes a conversation here that Siebe Thissen had with him in 2004.

In 1987 the CBK published the book "Visual arts and the Rotterdam metro", written by Dolf Welling. The book deals with artworks that were realized in and around metro stations. This mainly concerned sculptures and façade mosaics. Much has changed since then: visual art is no longer limited to sculptures and wall reliefs, but has also extended its domain to the users of the stations and the special nature of those public spaces. An example was the project 'Passage' by artist Robin van 't Haar. In 2004 he did research on a number of metro stations in Rotterdam. He published five city newspapers, which included photos of travelers. For each station he chose a typical action or position, which also adorned the newspaper as a headline: 'woman with shopping bag', 'man with suitcase waits patiently' or 'student drinks water'. A unique series of photos - a portrait of metro travelers in Rotterdam.

Siebe Thissen (ST): Can you explain the 'Passage' project?

Robin van 't Haar (RH):' Passage 'was the name of a newspaper that was specially made for five stations: Beurs, Eendrachtsplein, Dijkzigt, Rijnhaven and Schiedam. The newspapers, made by analogy with 'Metro' and 'Spits', reported on actions that I considered typical of those specific stations. Thus, five different newspapers appeared, which, like the 'Metro' and the 'Spits', were distributed to people at the exit of the stations. Not only was the format of the newspaper recognizable to people, the uniforms of the 'Passage' distributors also looked familiar.

ST: How did the travelers react?

RH: People responded very familiar: they are used to getting a newspaper in their hands in the morning. People often walked on, glanced at the newspaper and only later realized that it was a completely different newspaper. The reactions were more intense at some stations, such as at Rijnhaven station, because there are mainly residents and hardly any commuters - residents just have more time to look into something. Many people were surprised. Because it wasn't about anything! Because it was not that special, because so much attention was paid to their metro station.

ST: Why did you want to make the metro stations the subject of your intervention?

RH: Look, I am fascinated by transit rooms: passers-by in these places are hardly stimulated to perceive their surroundings and to actually be present in the room. Everyone here is so terribly passive. Yet these transit spaces are very interesting - they are increasingly becoming part of our public life. They are places where there is no excess: there are no shops, there are no workers at work, there is actually nothing, just that space, filled with passers-by. The space is ambivalent: it is anonymous, but also very intimate. You are rarely disturbed, but it also has a social effect.

ST: What role does 'Passage' play in your work as an artist?

RH: I investigate urban public spaces and analyze the specific behavior associated with that space. Every public space has an unwritten script, which prescribes to a user how he should behave in that space. I carry out that research myself, as an artist - not as a scientist, and give the results back to the public that I subjected to the research. That interaction determines the core of my interventions in public space. I find my justification there. If I study a place, I want that place to see the results again. By using photography I not only see people as passive spectators, but I also make them actors. I believe in activity and intimacy: I do not want to emphasize the passivity and indifference of a transit space. I think 'Metro' and 'Spits' are indifferent newspapers, indifferent in nature, indifferently put together - they make people abstract, indifferent buyers of their printed matter. It would be sad if that indifference would ultimately determine our public opinion. I want to add an element of intimacy to public opinion by presenting the space in which people live as a social, communal space.

ST: And is 'Passage' not an indifferent newspaper?

RH: No! "Passage" is really different. I do something small-scale, something intimate. I have the patience to conceive and make visible something very small - an action, an attitude. From 'Spits' and 'Metro' I only took over the format and the method of distribution to accentuate the feeling of recognition and the everyday familiarity.

RH: Nowhere in the newspaper does it say that there is art. I think 'art' would evoke too many prejudices. People would immediately think of landscape paintings or bronze sculptures. Only when they are addressed by the newspaper, they have become fascinated and leaf through, do they discover in the colophon that the project has something to do with art. They can also go to my website, if they want. But then they have arrived in a different world. The world of art.

ST: I think the idea of ​​the unwritten script can make an interesting contribution to the design of public spaces. Is that one of your goals?

RH: Indeed, the script influences public space, but also vice versa. Yet I am not a designer of public spaces, I am an artist. My fascination is always in the observation. I search for the rules that apply in public spaces and respond to them with my observations. Then a kind of story arises that I want to share with people who only want to be in such a space with themselves, but at the same time be with others. Such a newspaper as 'Passage' is such a game for me - it is simply a very appropriate medium for those metro stations. 'Passage' is a very social and intimate medium.

ST: Will 'Passage' get a sequel?

RH: 'Passage' has bothered me for a long time. All my views and my way of working came together so perfectly here: the observations, the photos, the different publics, the medium of the newspaper, the manner of distribution ... the project was so terribly finished that I could not get over it. After 'Passage' it was very difficult to start a new project in which everything would fall into place. I had never experienced such a situation as an artist before. I am currently working on a project that should take place on the train. I make a variation on the 'safety card', a card like the one you get on the plane with all kinds of survival tips in the event of an accident. But I make a 'social card', on which rules are stated about social behavior in relation to public transport ... but my idea is not nearly finished yet. 'Passage' has taught me how daily actions can take on a ritual character, how simple actions become social behaviors. I also want to further develop this insight in my new projects: where can I find individual and apparently anonymous acts that can develop into a social and ritual character?