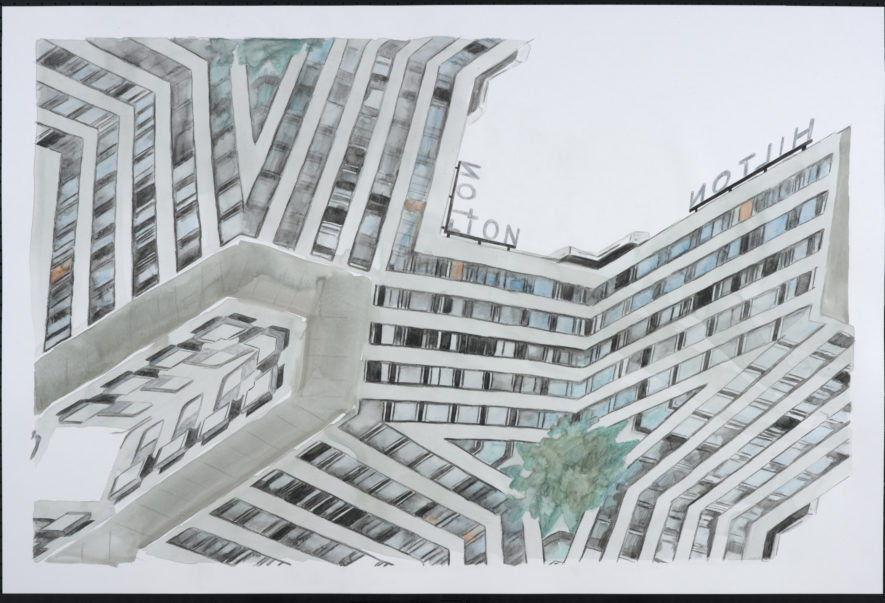 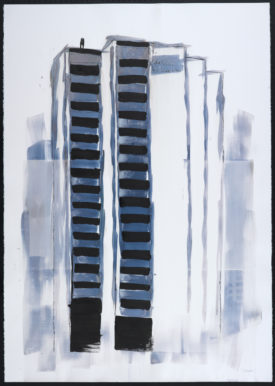 Sandim Mendes (1986) graduated from the Willem de Kooning Academy. In her work, Mendes uses photography and mixed media, addressing issues about identity and the relationship between cultures. She delves into the undocumented history of her family and ancestors, combining various artifacts with which she creates fictional images that fill gaps in an unknown history. After graduating in 2010, she was nominated for the Van Bommel Van Dam Prize for promising young artists from the Netherlands and Germany. Recently her work was also shown in TENT.

Sandim Mendes started work on the Adriaan Volker House in this project. In particular, she wanted the black glass facades to stand out to emphasize the solistic location of the building in the area. She did not approach the building from the usual perspective from the Maasboulevard, but from the back (Buizenwerf). 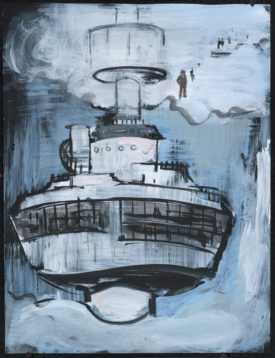 The oeuvre of Eveline Visser (1949) varies from small-sized paintings to installations that fill space. These installations are, as it were, three-dimensional paintings that you can walk through. For example, in 2015 she made a diorama for Museum Boijmans Van Beuningen. Visser 's paintings are striking for their virtuoso painting technique, in which the representation is made up of thin, translucent layers of paint. But in the end her work is always about content, meaning and interpretation. In this work we see the architect Hugh Maaskant we see in the top right corner in the clouds, according to Visser the construction of the Euromast for Maaskant should be a kind of Americain Dream van Maaskant, with the crow's nest as a space ship, as a kind of Rotterdam Apollo. The Euromast has a special meaning for Visser, because in her childhood Visser saw it being built at her doorstep. The space shuttle was only realized ten years later and not according to Maaskant's design. 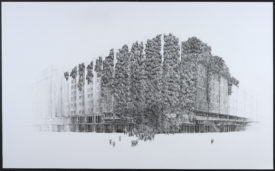 Georg Bohle studied industrial design at the Design Academy in Eindhoven. From 2007 to 2010, he worked as a designer at Studio Makkink & Bey. Bohle (1977) sees the built environment and pristine landscapes as cultural metaphors that provide a context for his work. He is fascinated by the complexity of data and impressions that, for example, a city offers. Some of Bohle's drawings show graphic interpretations of textures and compositional structures in man-made agglomerations. Other works show mountain landscapes with anthropomorphic rock formations. Within the field of tension between architectural and natural forms, between reality and the outer world, Bohle develops a growing series of imaginary landscapes. In the eyes of Bohle, the Wholesale Building is a place where traders in suits with dark ties constantly storm the building like busy bees. That image first occurred to him when he went to look at the building for this assignment. 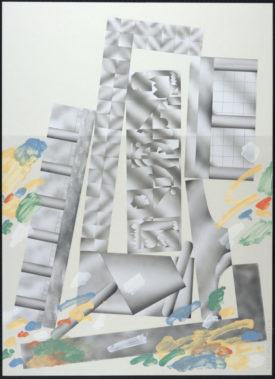 In his work, Nazif Lopulissa (1991) investigates the language of objects, places and situations in his daily life. As an image maker, he finds it important to have a clear, 'own', visual visual language. He tries to find a balance between constantly innovating and ensuring recognisability. “In addition, I consider every project to be of equal value: even if I am asked for an assignment that is outside of my comfort zone or that I find less interesting. I seize every opportunity to gain new insights, but in the meantime I always keep enough distance from my work to give myself the opportunity to reflect on my work and steer my development in the direction that I want. ”The former Rijks Automobiel Centrale, the current City Archives, sees Lopulissa as a kind of 'ghost' in the area. Hence in particular the shades of gray in the shapes he drew, the (autumn) colors on the plastic layer are the trees that give the building some color. The two collapsing columns (standing at the entrance) symbolize the movement of the public space and Kees Franse's artwork on the façade is the eye-catcher of the building. Lopulissa graduated from the Willem de Kooning Academy in 2017 and won the Henri Winkelman Award in 2018. 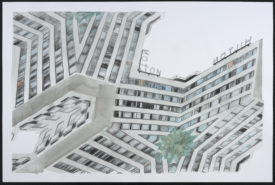 Marcha van den Hurk is interested in the relationship between people and their social and physical environment. She investigates how the environment determines man's identity and how man expresses his identity in shaping his environment. The connection between identity and environment is present in various ways within her work. She works in a variety of media: she makes space-filling installations, photographs, draws, sculpts, or combines various media. Her work focuses on the relationship between man and his social and physical environment. She examines how the environment determines the identity of man, but also how man expresses his identity in shaping his environment. In this way she highlights the way of life of certain subcultures or the individualistic existence of homeless people in multimedia works. She reveals the connection between identity and environment by emphasizing or distorting it in her work. Van den Hurk (1975) studied sculpture and mixed media at the AKI academy for visual arts in Enschede and did a follow-up course autonomously at the DAI (Dutch Art Institute).

For the project Maaskant signed Van den Hurk investigated the Hilton Hotel near Hofplein. She looked at the building from different angles and paid particular attention to the architecture and the striking structures in the facade. She combined these impressions into one drawing, creating a kind of kaleidoscopic effect. 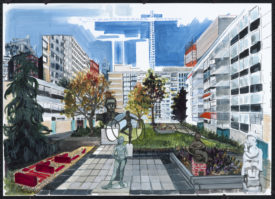 Inge Aanstoot (1987) graduated from the Willem de Kooning Academy in 2009 and won the Piket Prize for Painting and the Sacha Tanja Medal in 2014 and 2015 respectively. She is fascinated by images laden with symbolism, the unstoppable human association and the endless stream of images with which she sees herself surrounded in our world. Her work is therefore a whirlwind of daily things or experiences, dreams, wishes or fears around the central self. She paints with a preference for large formats and big stories. Her sources of inspiration come from her immediate environment; a concept that is nowadays wider than ever. Everything can get a place in her work; from trivial facts and anecdotes to big questions about life. Offense is fascinated by the selective and subjective way in which people deal with information, human association and (art) history in general. She never tells only one story at a time.

In her drawing of the Lijnbaan complex, various elements (which are actually spread over the area) are brought together in one collage-like drawing: the flats, two courtyards and various sculptures incorporated therein that are also part of the Rotterdam collection. At the front left is a model of the entire area. At the top left, Calypso and the Groothandelsgebouw are still visible. 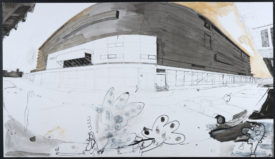 Ronald Cornelissen (1960) studied painting and monumental design at the St. Joost Academy in Breda. Initially he drew his inspiration from the twilight zone between avant-garde and underground, first through the music and only later through the visual arts. Although the frame of reference has become much broader over time, the influence of the media that have provided the international pop culture with image and sound is: collages, comics, cartoons, fanzines, graffiti, street poetry, performances, installations, noise and psychedelics still traceable in both the drawings and installations of Cornelissen. Although there are always specific and often recurring principles underlying his work, he is also guided by what happens under his hands. The work addresses themes such as power and the (geo) political landscape as it occurs in today's Western society.

Cornelissen drew the striking Technikon building at the rear, the Boekhorststraat / Hofbogen. He once cycled along here every day from his home on Noordereiland to his studio in Insulindestraat. It has literally become a 'back', with dealers and blowers, a shady automobile with a nod to Maaskant that loved these American models. 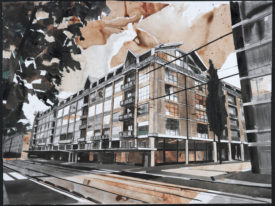 Pim Palsgraaf (1979) gets his inspiration from the friction zones and fringes of the city. The places where no one comes, who are forgotten, and sometimes hidden, waiting for a new destination. He makes dark structures that together grow into what could be an abandoned city. In his work, Palsgraaf shows the contrast between culture and nature. The city takes over nature. In contrast to the sculptures, Palsgraaf's paintings are based on the inner city. Empty spaces, old corridors and ceilings that are about to collapse show the fascination for decay. It depicts the erosion of the city, the 'natural' domain of humanity that is forgotten. Palsgraaf forms the collective together with a (changing) group of colleagues from Rotterdam and beyond Ipihan (If Paradise Is Half As Nice that has been carrying out temporary projects every year since 2012 in Leipzig (Germany) and beyond in abandoned factory halls.

In this collage, Palsgraaf has reduced the Industrial Building and the surrounding area to straight lines: tram lines, electrical wires, symmetrical articulation. No one can be discovered in this world. The first versions of the collage have been torn up and reused in the trees of the final version in contrast to the clean lines of the building. 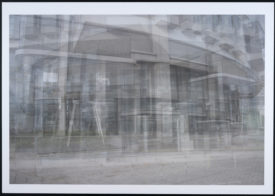 Marcel Swint (1975) is fascinated by transformation, for example by creating a different perspective on the basis of old postcards with images of disappeared monumental buildings in European cities. Sometimes it concerns buildings that no longer exist, often they were demolished in the second half of the 20e century. Swint tries to reconstruct history by making visible what was lost again through photographic documentation.

The assignment for the Maaskant drawing was the opposite. The buildings of Maaskant arose at a time when many of the buildings Swint is working on have disappeared. In the digital photo collage of the Citrus Auction near Marconiplein several images have been placed over each other, so that all information comes together in one image and repetitions arise that emphasize the specific characteristics, such as the typical bay windows. The quality of the building is shown in the final image, but also the closed and slightly neglected state in which it finds itself lurks. 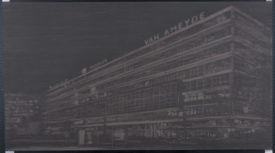 Sandro Setola (1976) focuses in his work on architecture and building processes, and the underlying ideals or ideas (or lack thereof). The tension between a utopian proposal and urban reality often raises questions about how our environment influences the individual and vice versa; how the individual can then shape or interpret his environment. This strong fascination for natural processes and phenomena forms the basis for all his works. Dramatic processes such as isolation, expansion, transformation, growth and death, but also their relation to our everyday and banal reality are thus interpreted in a personal, poetic and concentrated manner. The drawings often show frozen processes that the viewer can continue in mind or propose for dystopian places and buildings. In 2015, Setola won the biennial Charlotte van Pallandt Prize for a talented young sculptor. Setola has drawn the Zuidplein Collection Building from his memory. When he came here earlier, it was in his experience a gribus neighborhood with a dark atmosphere. On the ground floor you can still find the well-known grand café Rustburcht.