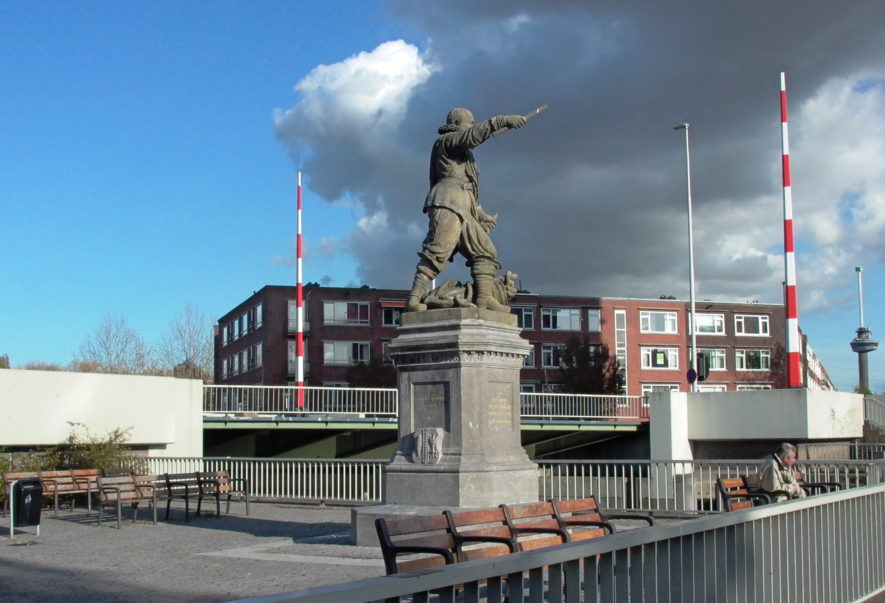 The statue of Piet Hein in Delfshaven, made by Joseph Graven - photo: Bas van Leeuwen

"May that image go away": what do we do with the statue of Piet Hein?

"May that image go away" *
At the end of 2017 the AD already asked the question: What are we doing now with Piet Hein? The question is about the monument that the then independent municipality of Delfshaven at the end of 19e century of this seafarer. The statue, made by the sculptor Jos Graven (1836-1877), was initially placed near the place where Piet Hein was born in 1577. When Delfshaven joined Rotterdam in 1886, the statue was included in the Rotterdam city collection. In 1966 the monument moved to the current location. (read on at bkor.nl). The statue, a national monument, is today in such a poor condition that it must be thoroughly restored or replaced in the short term by a copy. Naturally, this involves costs. So what now? Are we removing Piet Hein from our street scene or are we giving him a second life?

How are we dealing with our past?
The reason for the question of what to do with the monument can be found in the recent discussion that is also being intensively held in Rotterdam our dealings with the slavery past. What was the responsibility of the Netherlands in this, and how can we embed that responsibility in a relevant way in our knowledge of and dealing with the past? The discussion was triggered in 2017 by the Witte de With center for contemporary visual art, in the Witte de Withstraat. Because how could we have known all along that the best man had been 'wrong', but that we used his surname extensively in naming streets and, in this case, an art institution (which itself claims to 'reflect') in the contemporary and in the way art was created and experienced in the past. ”) The Nida party then urged the Rotterdam council that there should be a debate about sea heroes with a dubious reputation, and that thought should be given to the statue of Piet Hein. That research is coming, and must be completed by the end of 2020.

But who was Piet Hein anyway?
Piet Hein (1577-1629) was a seafarer and naval commander. He was known as sober, resourceful, fearless and skilled in the trade. With those qualities, he first joined the Dutch East India Company (VOC). He later obtained command of a number of missions from the West India Company (WIC). On the high seas - often in war situations and surrounded by piracy - the Delfshavenaar showed a remarkable leniency. Hein respected the Spanish enemy (he had spent nearly ten years in captivity), talked compassionately about the fate of Africans, and denounced the treatment that enslaved Indians received in America: 'Is it any wonder that the Indian wants to avenge his suffering on us? Friendship must come from us, because we visit them - they did not visit us. Let us see to it that we do not arouse God's anger by committing indecent acts and behaviors. " Hein had nothing to do with the slave trade. The West India Company only said goodbye six years after Hein's death to the command that "slave trade is an unauthorized form of trade for Christians." Recently Siebe gave Thissen (head BKOR from CBK Rotterdam) to Trouw that there is much to say about Piet Hein, but "Not that he had anything to do with the slave trade." Among other things, Thissen based himself on the book Admiral Silver Fleet (2003), a biography of Piet Hein, written by historian Ronald Prud'Homme van Reine. Science journalist Simon Rozendaal even says about Piet Hein: "In fact, he was just a boring person."

So what now?
The fact remains that our interaction with the past cannot be neutral. If we name a street after a "sea hero" without really reflecting on his actions, or at least mentioning them on the same sign, we show that we approve these acts and even find them worth honoring. The same applies to the creation and maintenance of monuments for controversial seafarers and settlers. Piet Hein will receive an extra plaque but of course it remains to be seen whether and how the municipality will give the other 'heroes' a more appropriate place, and whether these people will definitely fall off their feet.

The Afrikaanderwijk
Siebe Thissen will give a presentation at Het Gemaal op Zuid on our handling of 'wrong images' on October 25. The organization is in the hands of the historic Roterodamum association. In the context of the Month of History (theme: Uprising) Thissen examines the Boer War (1899-1902) and the Afrikaanderwijk. He particularly pays attention to the thirteen busts of South African presidents, generals and negotiators that were realized in 1902 in the neighborhood. Gradually, however, these survivors of Apartheid have disappeared from our street scene. Where have the images gone?

View which images can be found in your area on the BKOR website. Or talk about the future of the Piet Hein statue on our Facebook page.

*) The pronunciation can be read in this article in the Algemeen Dagblad, in which passers-by were asked for their opinion about the statue.