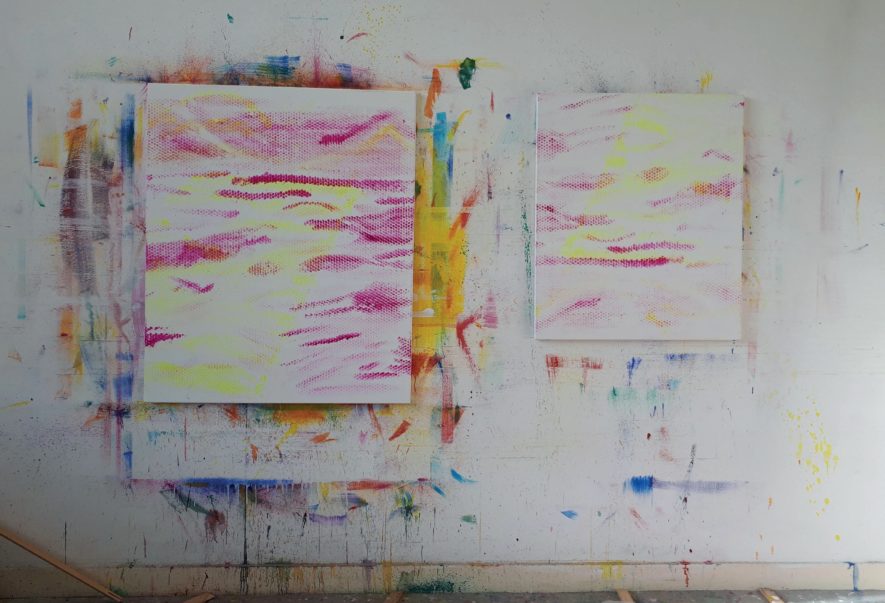 The deadline for the third round of 2018 is 12 October at 23: 00 hour. The dates for office hours are 25 and 26 September. You can register for the office hour HERE. (Please note: participation in office hours is not mandatory and does not affect the assessment of the application). Read more about the R&D application procedure on rotterdamsekunstenaars.nl

Niels Bekkema received a contribution for his research into the relationship between invisibility and presence during an 'Independent Residency in the Leighton Art Studios' of the BANFF Center for Arts and Creativity in Canada, in response to the experiences of the artist as a home counselor for status holders in The Hague.

In the project Noise study was from Sjoerd Westbroek he researches the phenomenon of noise in image and sound - with the aim of being able to come up with new work strategies in his practice as a visual artist.

Wouter Venema does with Facade research into the way in which the multifaceted and politically charged subject 'skin' can be connected in a poetic way to formal, technical qualities and the substantive aspects of the material glass.

Pavèl van Houten's project Scientific rituals looks for the connecting or ritual power of performing science by following, filming and questioning experts. To then investigate how the acquired knowledge can be presented to the public in various forms of media.

For the project Sensory thresholds was from Katherina Heil she participates in a residence at Nida Art Colony in Lithuania, where she uses drawings to explore how scientific images and data are explored with regard to the universe and matter.

With Swarming Chants, wil Jan Adriaans record the origin and distribution of hymns in stadiums in order to make it heard in a spatial sound work.

With Allegory of the Listening Demon, likes Ash Kilmartin engaged in adopting an anachronistic metaphor and manner and developing its own style, which enables the artist to communicate the possibilities of a contemporary feminist ethics of listening to various media.

Laurens Stok received a contribution for CMYKCYMKYMKCYCMMMMCCCYYYY; He investigates the printing of materials such as bubble wrap on canvas. The resulting grid is comparable to printing in CMYK. In the coming period he wants to focus primarily on printing and painting on a large format.

With A Manual to Mesmerize the Brain doing Antye Guenther research into neuroscientific images that are intertwined with neo-liberal corporate structures and ideologies, resulting in photo text-based installations and a performative reading.

Ellemic Shoemaker en Alex Jacobs develop in Paintings for (non) Believers a number of two parts that consist of two opposite forms of painting. One form consists of the now 'incomprehensible' non-figurative visual language and the other form concerns the way in which the cultural identity is shaped, or 'Believer' and 'Unbeliever' paintings.

In A Mutual Understanding investigates Abigail Prade on the basis of a narrative film and an artistic and audiovisual research, the existing prejudices about gender and transactional relationships. During each stage of the film making process, the artist will question himself, the cast, the crew and also the audience.

Viktor Timofeevs project Circular Ruins is an inventory of contemporary tracking and surveillance technology in order to be able to make a relationship with the movements of bodies in public space and their recorded digital footprint, as a bridge to choreographic practices and post-modern dance.

In Let's Re-vamp our Matriarchy! #New Pagan Music Video focuses Jasper Griepink focused on the reinvention of the Art of New Paganism from a stylistic and substantive point of view through the development of a new structure of poetry and writings alongside a music-performance video series with old European / Scandinavian / British holy places.

Under the title Public Library of | Grassroot tactics and public libraries undertakes Eva Olthof a study trip to the cities of New York, Washington DC and Chicago to identify and investigate self-organized initiatives at the intersection of DIY, art and the public library.

The project Gotca was from Daniel Jacoby is an investigation into the context of Cocachimba and the Gocta waterfall in the Amazon rainforest and the changes that the community has experienced since the "discovery" of the waterfall, resulting in a short abstract-narrative film.

In Vegetating Image: Root begins Zhou Junsheng a search for and research in the archives of Wittgenstein and other language thinkers for learning to write a new script in the computer language, with the help of expert computer programmers and imaging technicians for being able to realize new techniques.

Julien Grossmann will conduct research for six months into the possibilities of palm fats to be able to realize an installation such as a series of bas-reliefs / paintings or solidified blocks of palm fats and to be able to develop an industrial-looking sculpture from which crude palm oil flows.