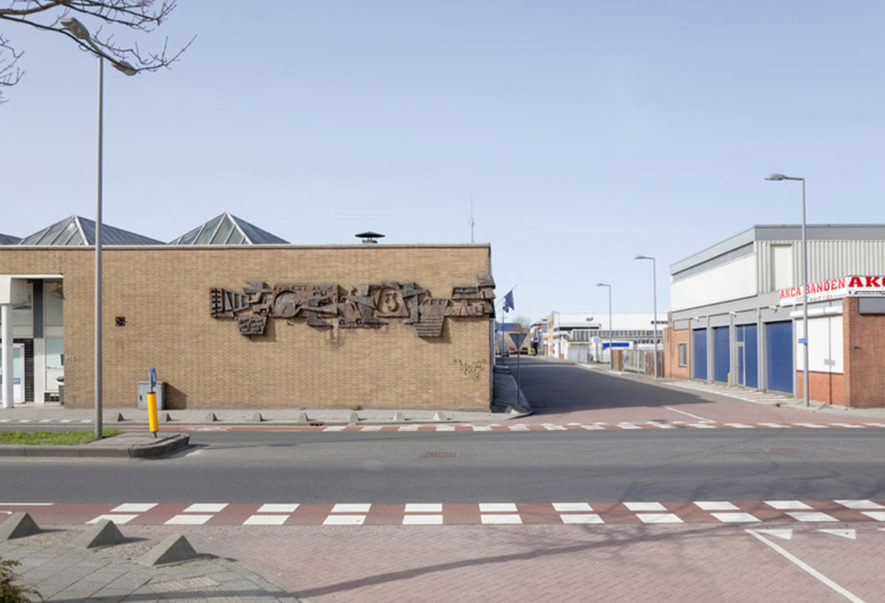 Artist of the wall relief found

On 12 June we asked our Facebook friends whether they could help us find the artist of this relief, which can be found on a facade on the corner of Industrieweg and Bornissestraat. And it worked! Via Carine Hooykaas and Margrith Barnhoorn our question ended up with Jessica van Erkel of the Porceleyne Fles (Royal Delft). She went into the archives and told us that work was made by Henk Tieman, and that it was delivered in 1963. She also sent a piece of evidence on which you can read: Ceramic decoration, representing: "The origin, development and current activities of NV Rhiwa in Rotterdam." (see image)

The Porceleyne Fles
The Porceleyne Fles is internationally known as Royal Delft: it is a pottery factory, founded in the year 1653 in Delft, which can now also be visited as a museum. The factory is known for its Delft Blue pottery but started an Experimental Department in 1956 that employed monumental artists, but also carried out building-ceramic assignments for external artists. This department, led by sculptor-ceramist-chemist Theo Dobbelmann and color technician and later glass artist Iep Valkema, has been important for the sharp increase in the use of ceramics in construction. Read more about the history of the Porceleyne Fles.

Henk Tieman
Visual artist Henk Tieman (1921 - 2001) studied at the Royal Academy of Visual Arts in The Hague. He was a student of artist Oswald Wenckebach (sculpture) and Frits Eschauzier (decorative art) at TH Delft. From 1938 to 1982, Tieman was employed as a monumental artist in the Building Pottery department of De Porceleyne Fles, first at the age of 17 as a plateel painter and designer of cloisonné tiles, but later as chief designer and head of the Monumental Building Plastic department. Tieman commissioned drawings, cloisonné tiles, ceramics, sculptures, glass art, plastics and wall reliefs. His work can be found on countless buildings in the Netherlands. Tieman worked both abstractly and figuratively. He was a member of Arti et Industriae in The Hague, and the Association of Visual Artists De Kring in Delft.

Help identify wall art
The National Cultural Heritage Agency (RCE) wants to put wall art back on the map as a forgotten art form, and has a complete website dedicated to works of art for which information is lacking. On www.helpwandkunstopsporen.nl everyone can watch and help: if you know a wall art from the reconstruction period (1945-1965) after the 2 world war, take a photo of it and report the work here. This creates a national overview on the basis of which the RCE can make choices for retention or relocation.

Wanted! Rotterdammers with an art-loving heart and ... a large wall
From July 2018 the remainder of the Dijkzigt hospital will be dismantled and at the start of 2019 it will actually be demolished: the special wall artworks of the Dijkzigt hospital will also be in danger of disappearing. The Working Group on Monumental Art (WMK) of the Heemschut Heritage Association has in the meantime been able to relocate a number of works of art in collaboration with CBK Rotterdam, but for two murals and a ceramic relief new locations are being sought.

For even more Rotterdam wall art You can of course visit the website of BKOR, the Visual Arts & Public Space program of CBK Rotterdam.