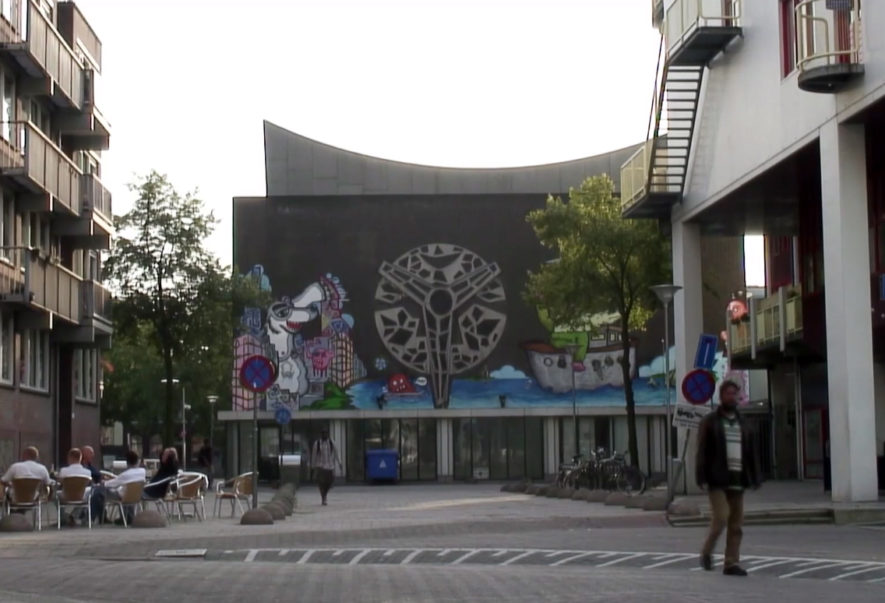 film about artists and reconstruction

Holes in the wall is a documentary about a special but forgotten collaboration between artists and architects during the reconstruction of Rotterdam. The city was enriched with hundreds of works of art in the 1945-1970 period. Filmmaker and architect Jan Dirk Schouten takes the viewer on a surprising journey past these former icons of the city. Holes in the wall is a search for forgotten and futile dreams and ideals of the reconstruction in Rotterdam.

Shortly after the bombing of 14, 1940 may open the first emergency shops, emergency cafes and even an emergency cinema in Rotterdam. Artists were involved in the construction of these emergency facilities. They designed banners, made facade paintings and even sculptures in the public space.

The intensive collaboration between clients, artists and architects came to a head in the 1945-1970 period when the scarcity of building materials and raw materials was great. Yet at that time the city was enriched with hundreds of works of art: mosaics, glass-concrete windows, brick reliefs, wall hangings and wall paintings, plastics, facade sculptures and monumental sculptures. Almost unnoticed in the 21 century the last buildings and works of art from that period of reconstruction disappear. Holes in the wall tells their story. In a personal film style, filmmaker and architect Jan Dirk Schouten takes the viewer on a surprising journey past the former icons of the city. He speaks with historians, artists and architects such as Brita Bakema, Ger van Iersel, Siebe Thissen, Dikkie Scipio, Woody van Amen and Peter Struycken.

Jan Dirk Schouten Schouten is an architect and filmmaker. Based on his interest in art and film, he initiates studies that lie on the borderline between architecture, art and film and makes films himself.

The DVD is a publication of Uitgeverij Diafragma in collaboration with the Rotterdam City Archives, CBK R'dam and Creative Industries Fund NL. Order the DVD for € 10,00 (playing time 100 minutes) at the bookstore or via publeverijdiafragma.nl ISBN: 9789490631550

A preview can be seen at uituitijdiafragma.nl