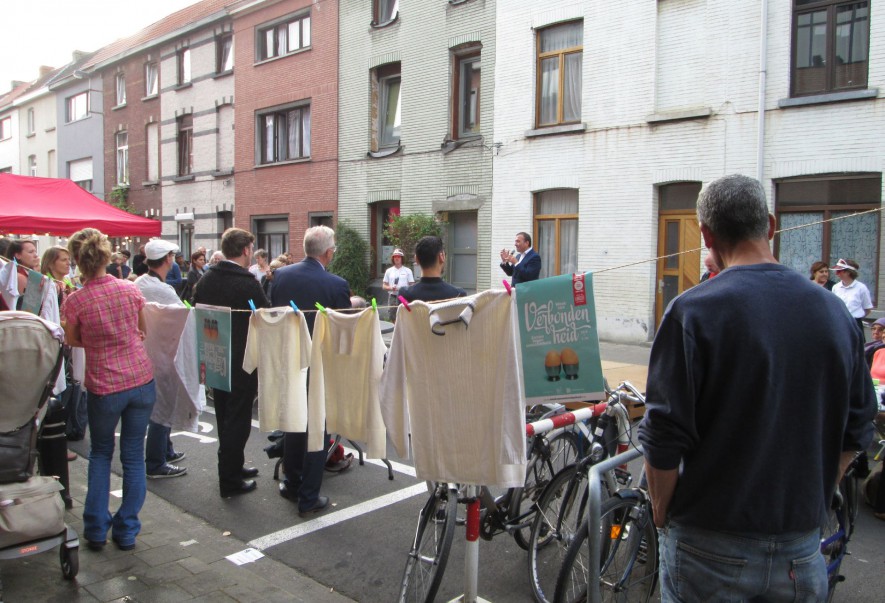 The deadline for the first round of 2018 is 9 February 23.00 hour. The dates for office hours are 30 and 31 January. You can register for the office hour HERE. (Please note: participation in office hours is not mandatory and does not affect the assessment of the application).

Read more about the R&D application procedure on rotterdamsekunstenaars.nl

Jan van de Pavert
An investigation into an installation of spatial figures in ceramics and textiles combined with voice. Jan van de Pavert will start a working period in the EKWC for the ceramic part. The voice is generated on the basis of interviews with various people, such as Japanese theater maker Terayama, rapper MF Doom, women from former Berlin communes from the years 1967-1969 or members of Pussy Riot and Algerian Berber singer Matoub Lounes.

Helen Anna Flanagan
The realization of an experimental video essay with the working title 'Swamps & Ponds', which deals with the origin of the 19e century Styrian arsenic eaters (Toxicophagi). This as a symbol / reason for further investigation into intoxication, the power of invisible substances and structures and the different forms of a collective in history. The project will be supported with a residency in Graz, Styria (Styria AIR) where it will be co-developed and presented.

Ronald Bal
The How to Fold a Crisis project is an investigation into origami acts as a method for a script for performance art. During the artist-in-residence program 'Co-Creation live Factor - Prologue 1 in Venice, a first step will be developed and led by Marilyn Arsem, the project will be presented at 15 and 16 December there. The method will be further elaborated in collaboration with origami scientist Robert Lang.

Alexandra Roozen
Plain Dust, a period for developing a series of large-format pencil drawings and a short film. In the series of drawings the role of the maker is questioned by thematic intrinsic body capacities such as breathing and concentration. In the film, the role of tool-handwriting is questioned by unconventional drawing techniques. The drawings and the film are presented in a solo presentation at the Younguen Museum of Contemporay Art in Seoul, South Korea. Based on this, during a residency of 3 for months in the Youngeun Artist-in-Residence Program, the project will be theorized on the basis of the South Korean art movement Dansaekhwa, in which the body is an important part in relation to technology.

Arian de Vette
CBK Rotterdam provides one-off support for the work period at the Rijksacademie with an R&D contribution for in-depth research aimed at experimenting with different ways of making work. Central to this is the translation of a small model into a large sculpture and the visibility of human action and tactility play a crucial role. Rapid prototyping will be used in this research.

Milos Trakilovic
This War of Mine, a theoretical and visual research into the successful video game of the same name based on real events from the Bosnian civil war. As an affected child in this war, the artist seeks connections with his own past and wants to incorporate this into an experimental video work / game. The work questions who has the rights to portray war experiences and how. It investigates the role of images in the reproduction and representation of violence. The aim is to develop their own virtual game character in collaboration with the 11 bit Studio's production team in Warsaw.

Eo Stearn
50 Years on living within Foucault's Heterotopias, is an investigation into 'formal space making' in contemporary Rotterdam by mapping temporary spaces, research into singing and movement in space as proposed by Foucoult and the relationship with the LGBTQI community. The ultimate goal is to make a visual translation into sculptural forms, a sound work and a performative reading. A point of attention for the artist is to place a clear focus on the many elements suggested to prevent fragmentation.

Ronald Cornelissen
Residency Svalbard is an investigation into the actual coming together of drawings and spatial work in an installation. The starting point here is a deepening of the themes from The Hyperborean Garden, in which the most important theme is the advance of the extreme right. For this, the artist will travel to Spitsbergen for a month to collect material that will be further elaborated in a long-term project. What is new is that the underlying research will partly take place on location.

Raluca Croitoru
Body Shift Ergo Drift, is a project for developing a performance for a black box space (UBIK) and a video work. The starting point here is how creative methods are used to increase efficiency and productivity in work and leisure, among other things. To this end, everyday activities with the aim of making the political and economic significance of mobility, creativity and flexibility visible in today's society will be redefined. The process will be recorded through a blog.

Quenton Miller
Traineeship is a documentary film that investigates how power is reproduced in the media industry through the use of acting techniques. The reason for this research is advertisements for actors from the archive of the The Stage and Television Today in the period 70-00 in which skills such as the Stanislavski en Method acting, but also switching between dialects were requested. Original material from the archive and interviews with the various actors of the time are used to create an anachronism between the actors, time, fiction and political reality.

Ine Lamers
Film essay Z, is an investigation into a script for a cinematic essay as an in-depth step and to conclude the research project closed cities in Russia. In collaboration with an essayist-text editor and with advice from a film and sound editor, a plan will be developed for a single-channel composition of image, sound and text in which a letter written by the artist will serve as a voice-over.

Isabelle Sully
Transit Through Handshake, a study in which the dual meaning of the term 'lobby' - as a physical architectural place and a political activity - is the point of departure. This will include a stay in New York, a residency in PHASMID, Berlin and a visit to the former German state archive in Koblenz and an interview with Ruth Wolf-Rehfeldt fieldwork. The aim is to develop scripts for language-based performances combined with accompanying sculptures.

Dario D'Aronco
Theoretical research as a stepping stone to a larger project, in which the retrieval of genes from the artist and the concept 'Creolization' by Edourd Glissant form the starting point and come together.

Hansma Tourmaline
Tourmailine, the development of cinematic skills in collaboration with Video Power to realize a large video work. With Video Power and master glassblower Marc Berreda, Jason Hansma will turn the different qualities and changing state of molten glass into an experimental cinematic subject.

Kathrin Wolkowicz
Befriending Rabot, is a meeting with the residents of the Rabot district in Ghent. On the basis of Spending Time, Working Together and Thinking Together together with the residents of Rabot, the artist will look for a common starting point and working method for the realization of new work and thus to reflect on the coming changes in the neighborhood.

Patricia Pinheiro de Sousa
As Heavy as Gold a research project that reflects on the concept of trust in relation to centralized economic institutions and new decentralized technologies such as Blockchain. The aim is to develop a short experimental film and performance from different angles and perspectives, in which raw materials and the extraction thereof become representative of both systems. What is the status of trust now that it is no longer visible through marble but invisible through algorithms?

Julie Boschat-Thorez
Faster than Empires, a (visual) investigation into an alternative treatment for irritable bowel syndrome, with the underlying question: does the patient own her own body? Among other things, relationships with the pharmaceutical and medical world, the DIY communities and the potential of biopower will be investigated and reflected and the extent to which knowledge is available.