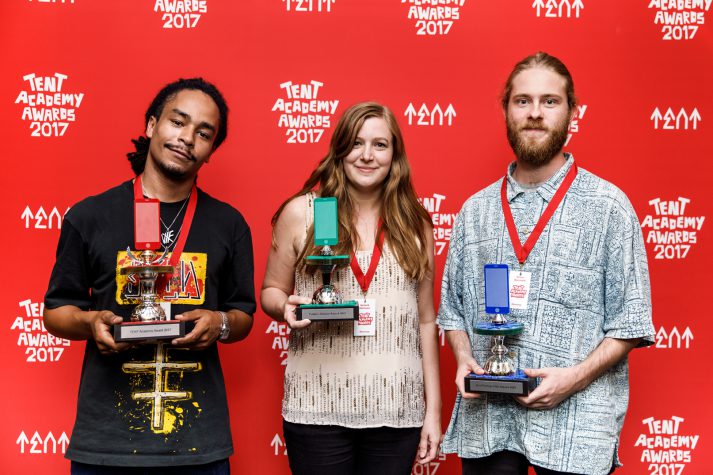 Festus Toll and Simen Gjersvold are the big winners of the annual competition between the best graduation videos, films, shorts and animations. Festus Toll won the TAA 26 Saturday August 2017. Simen Gjersvold won the Best Foreign Film Award, the prize for the best graduation video from young artists from host country Norway. Igrayne Hörmann's film has been voted the audience's favorite. In KINO the Awards were presented by the jury led by Rutger Wolfson.

TAA 2017 The film We Will Maintain by Festus Toll won the prize for the best graduation video from the Dutch art academies. The film is about a Kenyan child whose uncle predicts that a child of mixed parents will never feel at home in Africa and not in Europe. Twelve years later the child is a filmmaker and investigates the meaning of his uncle's prophetic words. The jury had a great deal of appreciation for the way in which he manages to make today's important subject matter very personal. Festus himself says about his work: “I hope that my film picks up on two feelings: People who cannot feel at home in a new country and original inhabitants who fear that they will become a minority in their own country because of the arrival of new fellow countrymen . ”We Will Maintain has also been selected for the NFF Student Competition 2017, IDFA and the IFFR. Festus Toll studied at the AKV St. Joost Academy in Breda and won an artist-in residence at Hordaland Art Center in Bergen, Norway.

Best Foreign Film Award 2017 Simen Gjersvold won the Best Foreign Film Award with his film I across. I Overkant is a self-reflective mockumentary about an inquisitive film student who tries to fulfill his expectations and ambitions while filming his own graduation film. It appeals to a feeling that everyone knows, that of a scammer or cheater, according to the jury. Simen Gjersvold graduated from Nordland College of Art and Film and won an artist-in residence at Het Wilde Weten in Rotterdam.

Public's Choice Award 2017 The public award was presented to Igrayne Hörmann, the nominee of the Utrecht School of the Arts. Her film Red Crayons is about Syrian children learning a new language and telling about their experiences. It is an intimate perspective on the still furious war and on the difficult journey to a new homeland.

Screenings in TENT Every Friday during the free Art Night in Witte de Withstraat, TENT is open from 18.00 to 21.00 hours. A selection of the nominated video works will be shown on the Friday nights of 8, 15 and 22 September.

About the TAA The TAA is organized annually by TENT, platform for contemporary art in Rotterdam. The TAA offers a stage for young audiovisual talent and is a springboard for greater recognition for graduating artists.

The TAA is made possible in part by the Norwegian Embassy Media Partner: BK information