How Joren Joshua and Ilse Weisfelt found jazz in their mural

For Hiphop In Je Smoel (HIJS), Jaap van der Doelen interviewed illustrators Joren Joshua and Ilse Weisfelt about the mural they made in the Boomgaardhof. An initiative of Rewriters010 in collaboration with and financial support from CBK Rotterdam and City of Rotterdam. CBK Rotterdam contributed with an Investment Contribution, which can be requested when there is an assignment situation with a client and a contractor. With this scheme for Rotterdam artists, CBK Rotterdam wants to give a boost to the cultural entrepreneurship of artists. Partly as a result, existing artistic practices can develop optimally and increase their visibility in the city. Below the article by Jaap van der Doelen of 19 July 2017.

Joren Joshua and Ilse Weisfelt are two talented illustrators and street artists. But there is more that binds them than their profession and the preference for evenly colored surfaces; Ilse and Joshua are also a couple. Together they made a swinging diptych on two walls on the Boomgaardhof in Rotterdam, although it had quite a few feet to get these murals on it. A story about something too diligent city guards, debilitating rain showers and a brief relationship crisis while sketching.

"A lot of things went wrong," Ilse looks back, to which Joren responds that "in the meantime it is part of the whole thing". You always have setbacks, although this time they were faced with a number of new surprises. That started with a mistake about the size of the wall. "We thought it was ten by ten and then that dot, but it was twelve by ten," says Ilse. “So we sketched it out completely and then we saw it. Oops, way too small. ”A new, adapted sketch was quickly put over the old one. As a result, they could count on both duplicate work and a lot of compassionate looks. "It was really a mess," says Joren. “You already saw people watching 'OK? What's up? "" Ilse: "Is this okay?"

"And then came the city guards who brought us down," Joren recalls. "Just when we wanted to go full blast," says Ilse. The aerial platform on which they were located (no favorite necessity of Ilse) could not stand entirely on the sidewalk, so the traffic had to turn around. And although there was a permit for the painting, there was no permit for that traffic obstruction. Eventually, the work stopped for a day, during which the bureaucratic issues were ironed out as quickly as possible. Moreover, a heavy shower at the end damaged the still wet paint, causing the work to literally and figuratively run out. “We were already surprised how much sun we had. It was the first wall where we had to put ourselves in, for this we were always mainly watching rain radar ”, says Joren. "Because of the city guards, we have been delayed by one day, so that we were caught in the rain," he judges. "And because of our own estimation error," Ilse concludes.

Despite these setbacks, the duo looks back on their work with satisfaction. "That diptych makes it surprising, because when you come from the other side you see one and then perhaps the other in a reflection," says Joren. "Or you see one first and then you walk on and on," hey. there is another one. " That makes it playful, you play with the space, with the depth. ”Moreover, they got a lot of inspiration from the subject, which has a direct link with the history of the location. "It symbolizes the old jazz club Mephisto," explains Ilse. The so-called 'negro palace' was a popular and notorious place of entertainment in the Rotterdam of the '30, and was located near the place where their mural can now be found. "Many older people were afraid that the youth would go the wrong way and derail completely, that people would dance like wild animals."

Jazz was rebellious music at the time, a real underground culture. "We did try to make that come back, that wild and swinging, and actually that separate from the black culture, really let go," says Joren. On the great wall she painted two dancing figures, on a path of piano keys. Together with the eyes at the top of the drawing, these keys form a watching face. "The old entrance was literally a devil's head through which you went inside," he says, "it is as if they are really literally dancing on the face of the devil, or going through that old entrance."

The second, narrower wall contains the name 'Mephisto', but visually there is also a clear connection with its counterpart. "The keys are the connecting factor, and the colors of course, but they also stand on their own," says Joren. "I think it is nice that we have done a wall once without a figure, also for ourselves, in order to find a limit in it." Moreover, the letters look agile because of their playful placement, just like the dancers later. “The letters have the same swing. And there we have again let fire come back; from hell and the diabolical, but also because the club has burned down. " 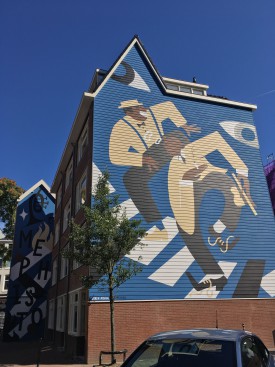 Capturing the schwung in a graphic composition was the first challenge of the project. "Joren's characters have more lanky arms and legs, so there is more movement anyway," Ilse says. "I searched for a dancing posture a little longer, but when we finally had two figures that had more or less the same posture, it strengthened each other again, because they were doing the same dance together."
“I think that dynamics are always important. An illustration or a wall painting is always framed, flat and standing still, but by creating a kind of looseness in your image you can awaken the association that it is a movement, that it comes free from its frame, "explains Joren. “You can also do that in the composition by cutting things off. We did that with those keys, they disappear from the screen again. "Ilse agrees:" If those keys were not there, it would be more static, they also create more depth. "Joren:" While it always is is flat again. That keeps it exciting. "

Because the subject appealed to the imagination in this way, the design phase also ran more smoothly than the couple are used to. “The two of us are very good when we are working it out on location. But designing that is always ... "Joren drops a minimal break in which Ilse seamlessly complements him:" hatred and envy. "

According to them, that takes about two to three days. "We are also focusing on it a little, although we hope that this time it will be better than expected," says Ilse. The frustration is caused by a difference in how they approach assignments. "Usually Joren already has all kinds of ideas right away, and then he starts shouting all sorts of things, so I get a bit overwhelmed," Ilse explains. "I am a somewhat noisy, quick thinker and actually want to spar right away," Joren agrees. "While I have to do it on my own in the beginning," Ilse responds. “Ilse is really a designer, who doesn't actually sketch. He sketches in her mind and immediately draws what she came up with. I sketch and think at the same time, which makes my sketches unclear and very unclear. ”

That difference in approach is also reflected in their individual styles. “I think my work is a bit simpler. I use more straight lines, a bit more graphic. Your work is just a little crazier, "says Ilse.
Joren: “A bit more abstract. With me you sometimes have to search a little longer for 'what am I looking at?' or "how does this leg and that arm run?" Ilse has a very clear style, you can capture it in one image, where you sometimes have to look twice. You are very to the point and I have some more difficult things. "

That difference in approach is also reflected in their individual styles. “I think my work is a bit simpler. I use more straight lines, a bit more graphic. Your work is just a little crazier, "says Ilse.
Joren: “A bit more abstract. With me you sometimes have to search a little longer for 'what am I looking at?' or "how does this leg and that arm run?" Ilse has a very clear style, you can capture it in one image, where you sometimes have to look twice. You are very to the point and I have some more difficult things. "