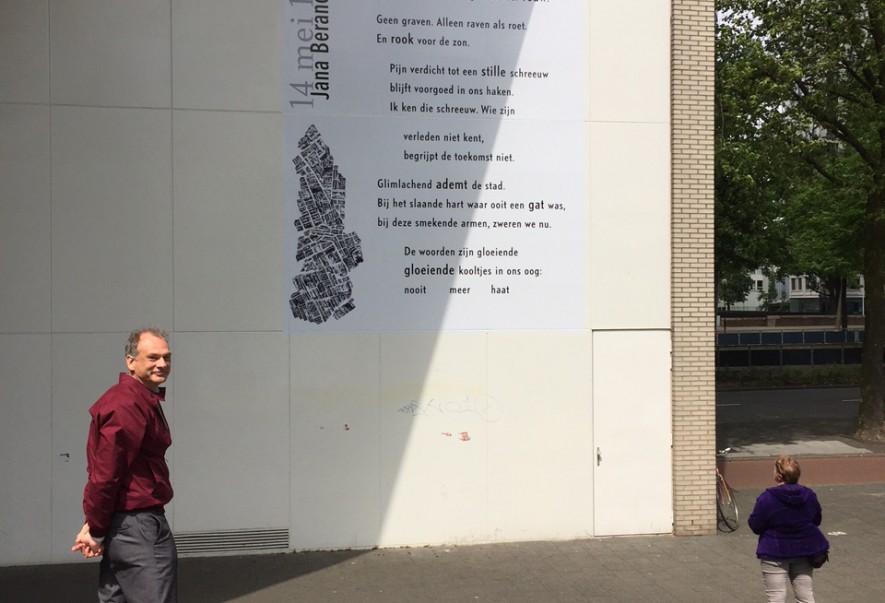 14 May poem by Jana Beranová back

The 14 May poem by Jana Beranová (City Poet 2009-2010) is temporarily back. The poem was applied to the Maritime Museum, and was absent for a few years.

It has since been reapplied to a large surface, after design by Bart Oppenheimer (photo). Every year the city poet of Rotterdam writes a poem to read during the commemoration of the bombing of Rotterdam. The bombing was carried out by German bombers on 14 in May 1940 around 13: 30 hours as part of the German military raid on the Netherlands. The bombing lasted almost fifteen minutes and destroyed almost the entire historic city center, partly due to the fires that started. An estimated 650 killed 900 people and about 80.000 became homeless. The commemoration takes place annually at the sculpture of Ossip Zadkine. This year Stadsdichter Derek Otte contributed to the commemoration.

About the design: “the words 'cities', 'mourning', 'smoke', 'silent', 'breathes', 'hole' and 'glowing' are slightly larger, for which the non-explicit words have been chosen, for a higher concentration in reading, but without drama. It opens the text and visually makes it a less monotonous field. "

Limitless Rotterdammers How do you make a new place your home and how do you become a Rotterdammer in a city with 170 nationalities? Dore van Duivenbode gata looking for the answers.
Sculptures. Urban embellishment in Rotterdam since 1940 A new book written by Siebe Thissen (head of BKOR) about the reconstruction in Rotterdam and the role that art played in it
Photo gallery uprooted images Uproot Rotterdam