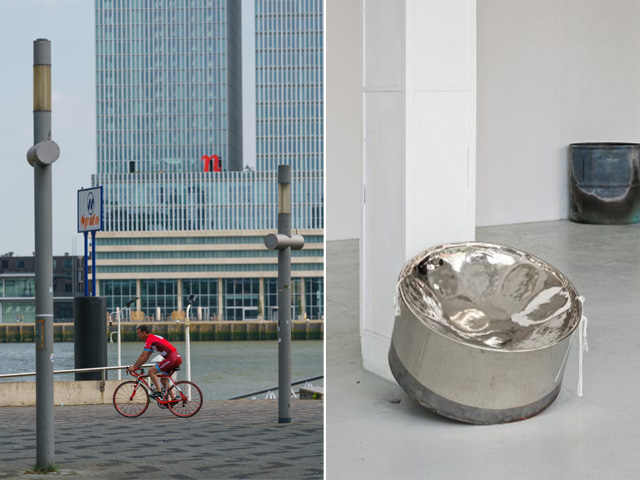 Sound art seems livelier than ever. At more and more exhibitions, festivals and places in the public space, sound art is given the space to make itself heard. This is also the case in Rotterdam. This spring, sculptural sound works by Julien Grossmann can be heard in TENT. The sound artwork was also placed under the Erasmus Bridge Seven Tears from Susan Philipsz. But what exactly is sound art? And does it add something to our already crowded environment?

Tinkling trams on the bridge, waves crashing against the quay, shouting people on the terrace, the roaring engine of the Spidoboot that is about to depart: under the Erasmus Bridge, on Willemsplein, a jumble of sounds passes by day and night . Who is still aware of this urban cacophony today? We are more and more bound to our mobile phone. And whether that is ringing or humming along with the music playing through our earphones or noise canceling headphones: everyone seems to have withdrawn into their personal sound capsule.

Could the strongly increased city noise have something to do with this development? In recent decades, spatial planners have taken many measures to minimize or isolate unwanted traffic noises, such as noise barriers and quiet areas. But sound is almost never a starting point for the improvement of public space, where light and sight lines often predominate. This means that the reverberations and resonances of city life are merely side effects of the events in the city. We take it for granted and literally hide our ears from it - safely hidden away behind the sound of our own choice. Although few architects and planners are still venturing to integrate sound into architecture and public space, sound art seems to have been on the rise for several decades.

No unambiguous genre
Although ... sound art? We might speak better of artists who make works with or about sound. Because there is so much variation in sound artworks that we cannot speak of a fixed art movement. There are not only many forms (from sound walk to sound sculpture) but also different contexts (site specific or not) and starting points (such as 'autonomous' sound, in combination with vision and touch, or with references to, for example, politics, history or technology. ). And then we have not even talked about acoustic versus digital sound art and the distinction between sound art that nestles into contemporary musical developments or that is more relevant within contemporary art. Anyway, it may be clear that we cannot speak of sound art as an unambiguous genre.

In recent years, there has been a spectacular increase in the number of sound art projects in public spaces: sound walks are organized in many places and sound art festivals move into the open air. For example, Soundtrack City organizes sound walks in Amsterdam, Rotterdam and Istanbul, and Sonic Acts devoted a large part of its thirteenth festival edition to sound art projects in public spaces. Yet most of these projects are of a temporary nature; we see few permanent sound artworks in public spaces. An exception is the Cultuurmijl in Enschede, where sound works by Bill Fontana and Andreas Oldörp mark the connecting route between the Roombeek district and the city center.
Because sound art is (largely) intangible, you would expect that the proportion of sound art in the public space is much larger. After all, the way in which she claims a place is much less physical than with 'traditional' art forms in public space such as sculptures. In addition, sound art is by definition abstract: even though the maker has a purpose for the work, it cannot be transferred one-on-one to an audience. As a result, a sound artwork will be less likely to fall prey to the political sensitivity that art often threatens in public spaces.

Liquid perspective
On the Willemsplein, under the traffic violence on the Erasmus Bridge and opposite the brutal architectural colossus De Rotterdam, proves Seven Tears the expressiveness of this subtle art form. Spread over the square, seven speakers hang on lampposts, from which fragments of music can be heard. The work is based on the composition Pavana Lachrimae by Jan Pieterszoon Sweelinck (1562-1621), a composer who was inspired by the song for this work Flow My Tears by the English singer, lute player and composer John Dowland. Although melancholy has been a recurring theme since the classics, a true cult developed around this state of mind in the early modern period. World-famous melancholy characters such as Shakespeare's Hamlet and Goethe's young Werther were brought to life in this period. John Dowland was one of the best-known exponents of melancholic music, but the tear motif also regularly appears in Sweelinck's oeuvre.

Philipsz's translation of Sweelinck's composition was played by musicians on water-filled glasses, referring to the lamentation of Dowland. The tones that seem to flow from the speakers infiltrate into the ambient sounds of the space near and under the bridge. Because the sounds linger there, the work is in a certain sense physically limited, so that it not only offers passers-by an auditory experience, but also a new perspective on the formerly everyday square. With this, Philipsz has in fact created a new, completely abstract architecture that requires no images. The sound alone is sufficient to throw passers-by back on themselves and their immediate surroundings.

The politics of sound
A few hundred meters away, within TENT's exhibition walls, Julien Grossmann also takes historical sounds as his starting point. But where Philipsz, as it were, transforms them into abstract, almost spatial installations, they are a reason for Grossmann to raise political issues about globalization and natural resources. In the exhibition Customs and Claims Grossmann presents the sound works in conjunction with installations and photography, such as a giant zeppelin that can already be seen from the street. The once utopian airship bears the logos of 12.000 fictional banana brands, as an ironic nod to the fact that currently only one banana variety is being grown for export - making the global banana industry very vulnerable to persistent viruses.

The cyclic melody of a maqam rast, a originally Persian scale that was later also used in Arabic music, sounds through the space. The sound seems surprisingly to come from the steel drum, an instrument that originated in the rebellion of the oppressed Afro-Creole community against its French rulers in Trinidad in 1937. The oil barrel next to it betrays what both musical phenomena have in common: they come from countries that have fallen prey to the geopolitical power structures around oil, minerals and other natural resources.

Also Kokin (…) Slendo makes clear how we unconsciously associate sounds directly with cultural identities. On six gramophones, compositions that Grossmann based on global music systems play, such as the myxolidic scale from ancient Greece and the slendro mood in Indonesian gamelan orchestras. With the accompanying diorama of fantasy islands, Grossmann gives a big nod to the romanticized cliché fantasies that evoke 'exotic music' in us. In the dark space behind it there is a mysterious atmosphere. One of the oldest Peruvian music recordings can be heard through the gold-colored structures of vibrating piezo-electric discs. Serranita was recorded in 1910 by Hans Heinrich Brüning on a wax roll, the precursor of the gramophone record. This German ethnologist and archaeologist has done a lot of research on indigenous peoples in the north of Peru, gradually gaining their trust. To capture their traditionally endangered traditional culture for future generations, Brüning has made many audio recordings such as Serranita. In the meantime their language is almost completely extinct, and the traditional music culture has not survived. Sadly the Serranita as a testimony, on four graceful supports whose material refers to the Spanish and conquerors eager for land and gold in the sixteenth century who were responsible for the fall of the once powerful Inca empire.

Art as a public space
Existing compositions, instruments and sounds thus form the basis of the work of both Julien Grossmann and Susan Philipsz. However, their approach is very different. At Grossmann, sounds are a means by which the artist makes critical statements about history and politics and thereby pushes the visitor into a certain line of thinking. The sound is therefore secondary to the context. Philipsz's adaptation of Sweelinck's historical composition does just the opposite: because the sounds literally predominate, the sound creates a new, open space for the movement and perception of any passer-by. With Seven Tears Susan Philipsz did not create sound art in public space, but created a new public space as sound art.

Julien Grossman - Customs and Claims can be seen until 14 May 2017 in TENT Rotterdam.

Seven Tears by Susan Philipsz plays daily at dusk on Willemsplein, under the Erasmus bridge.