Giuseppe Licari is originally an Italian visual artist. For his art education, he left Sicily for Bologna, from where he went to study at the AKI in Enschede. He then settled in Rotterdam where he built up his art practice. In recent years he has worked on various projects, has participated in group exhibitions, has had solo exhibitions and has done various residencies abroad. Thanks in part to an R&D grant from CBK Rotterdam, he stayed at 2016 in Boise, Idaho in the United States, where he concentrated on his fascination for nature and the influence that people exert on it. In front of BK information Licari wrote the following article about his residency in Idaho.
His exhibition will open on March 16 2017 Schlak in TENT. 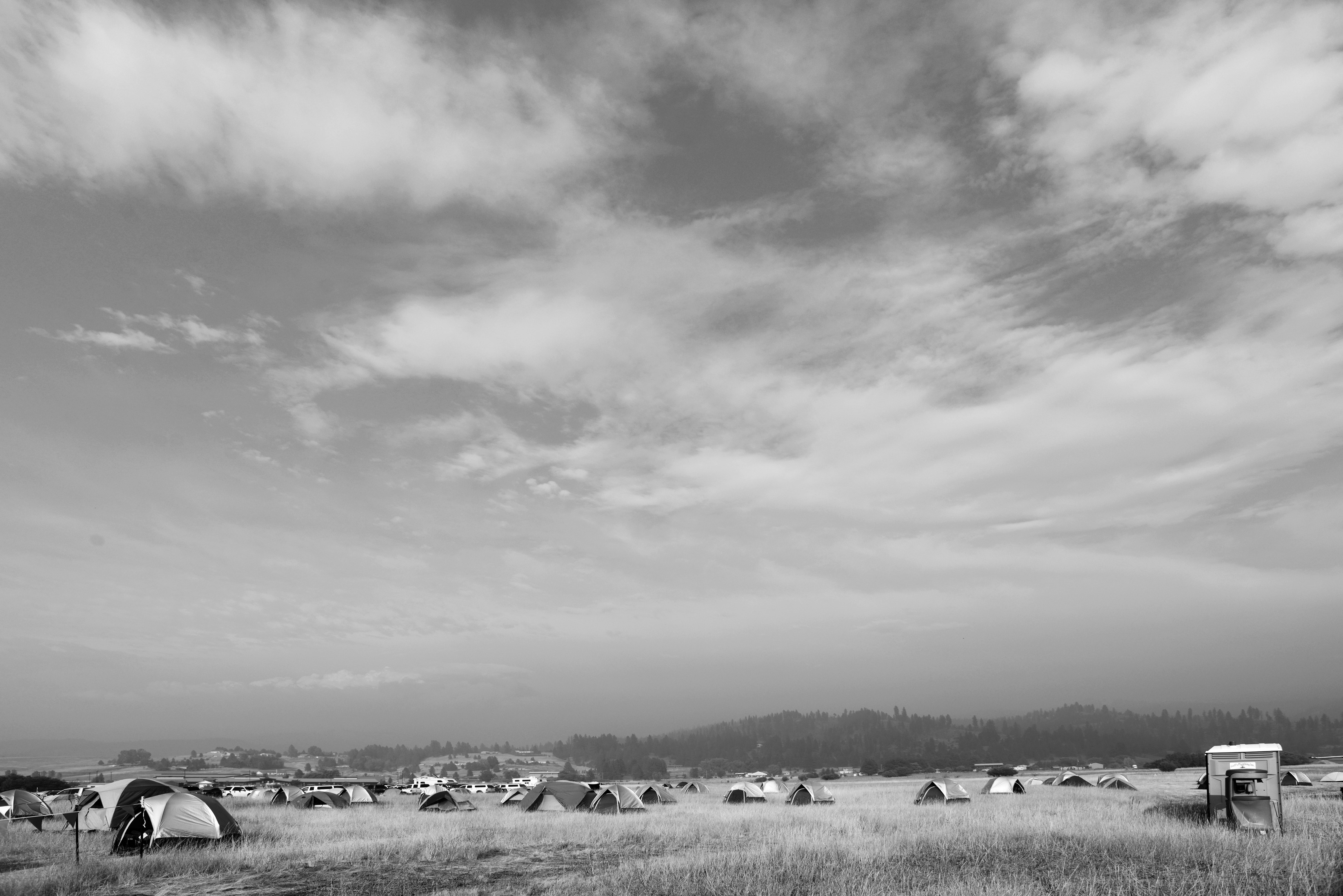 The preparation
Idaho is located in the Midwest of the United States, sandwiched between the states of Oregon and Wyoming. It was always an important historical site due to its location on the Oregon Trail, an east-western pioneering emigration route that connects the Missouri River with the Oregon Valley. For most residents of the United States, Idaho is known for its rich variety and production capacity of potatoes. Scattered across the landscape in Idaho you will find natural hot springs that push their warm water into the cold rivers.

After I was invited to present a project for Ming Studios in Boise, the capital of Idaho, I started investigating the local environmental issues. I soon discovered that Idaho is one of the states that suffers the most from huge forest fires. Since 1988 - the year in which much of Yellowstone National Park in neighboring Wyoming went up in smoke - the area has experienced exponential growth of these types of disasters, due to climate change, severe drought and a European parasite that has occurred in the last 20 year destroyed much of the forests.

Intrigued by this topic, I started researching the United States Forest Service (USFS) and the way they maintain and manage forests. I found that the forests that Europeans found at the time of the pioneers are not the original forests, but the result of attempts by many generations Native Americans to keep the forests up to date and healthy. They did this by regularly lighting preventive fires. These forest fires had two goals. In the first place, they were able to rid the forest floor of waste and dead plants. And secondly, a fire ensures that parasites do not get a chance and the land is, as it were, sterilized, so that the soil becomes more fertile and crops grow better, something that benefits both livestock and humans. 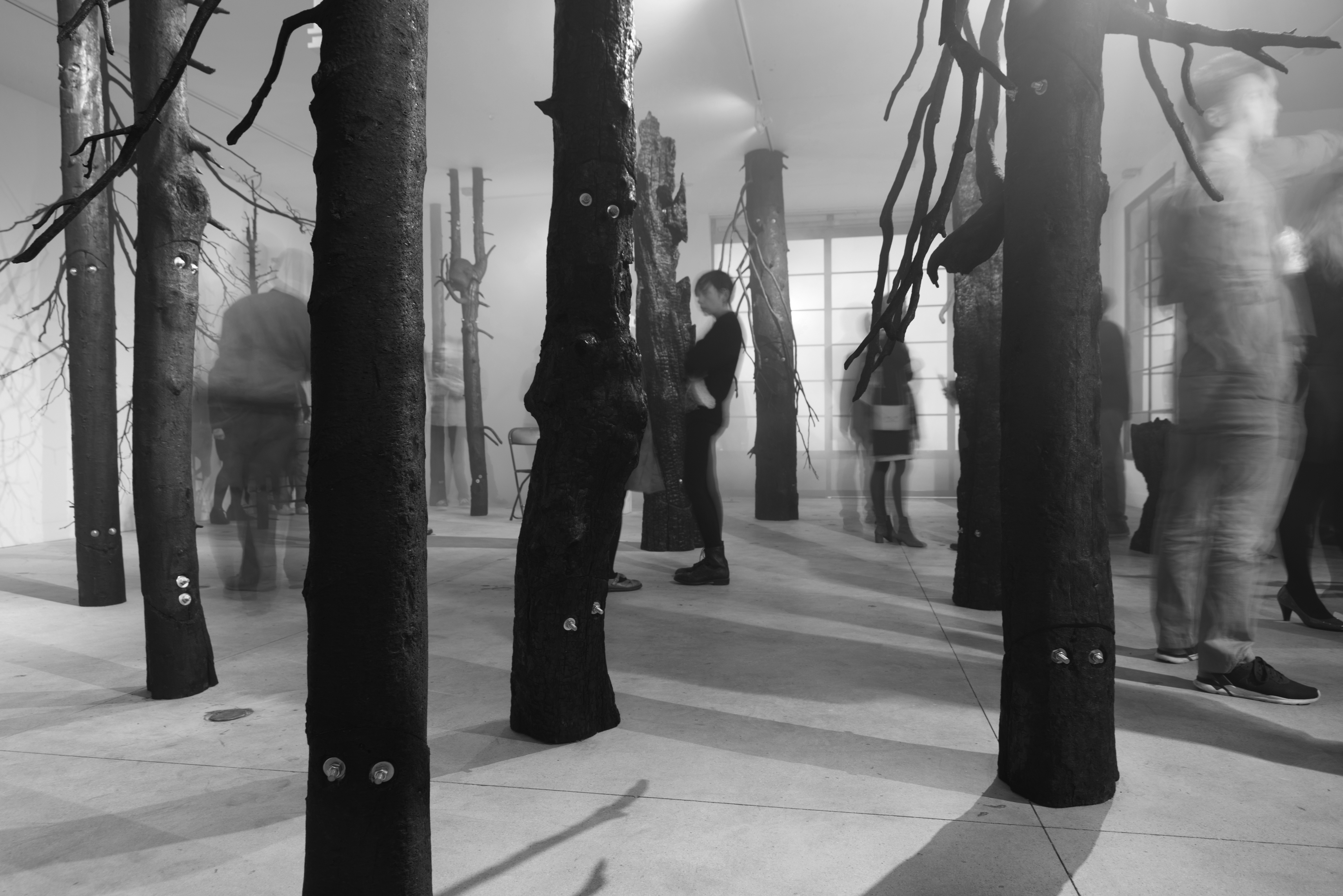 The founding of the USFS, some 150 years ago, put an end to the tradition of controlled forest fires. Of course, forest fires have been fought since that time. After a century and a half of repressive policy with regard to forest fires, American forests are full of enormous amounts of waste and dead trees, which means that forest fires can take on huge proportions. The USFS is currently working with the original concept of preventive forest fires. Local authorities promote controlled fire among the local population as the only way to prevent the large destructive forest fires.

My proposal for Ming Studios consisted of a photographic investigation of the impact that (spontaneous) forest fires have on local forests. In addition, I would make an installation in the gallery space where I would use charred pieces of tree from burnt forests.

Once in the US, I was soon confronted with the extremely complicated bureaucracy that further affects the already not so good condition of American forests. After meeting with the local authorities of the Boise National Forest, I decided to drive to a recently burnt-out area. The Pioneer nature had spent three months, from July to September 2016, in an area just 70 km outside of Boise. It was one of the biggest forest fires in the history of Idaho, had destroyed more than 760 km2 forest and fighting it had been extremely expensive. 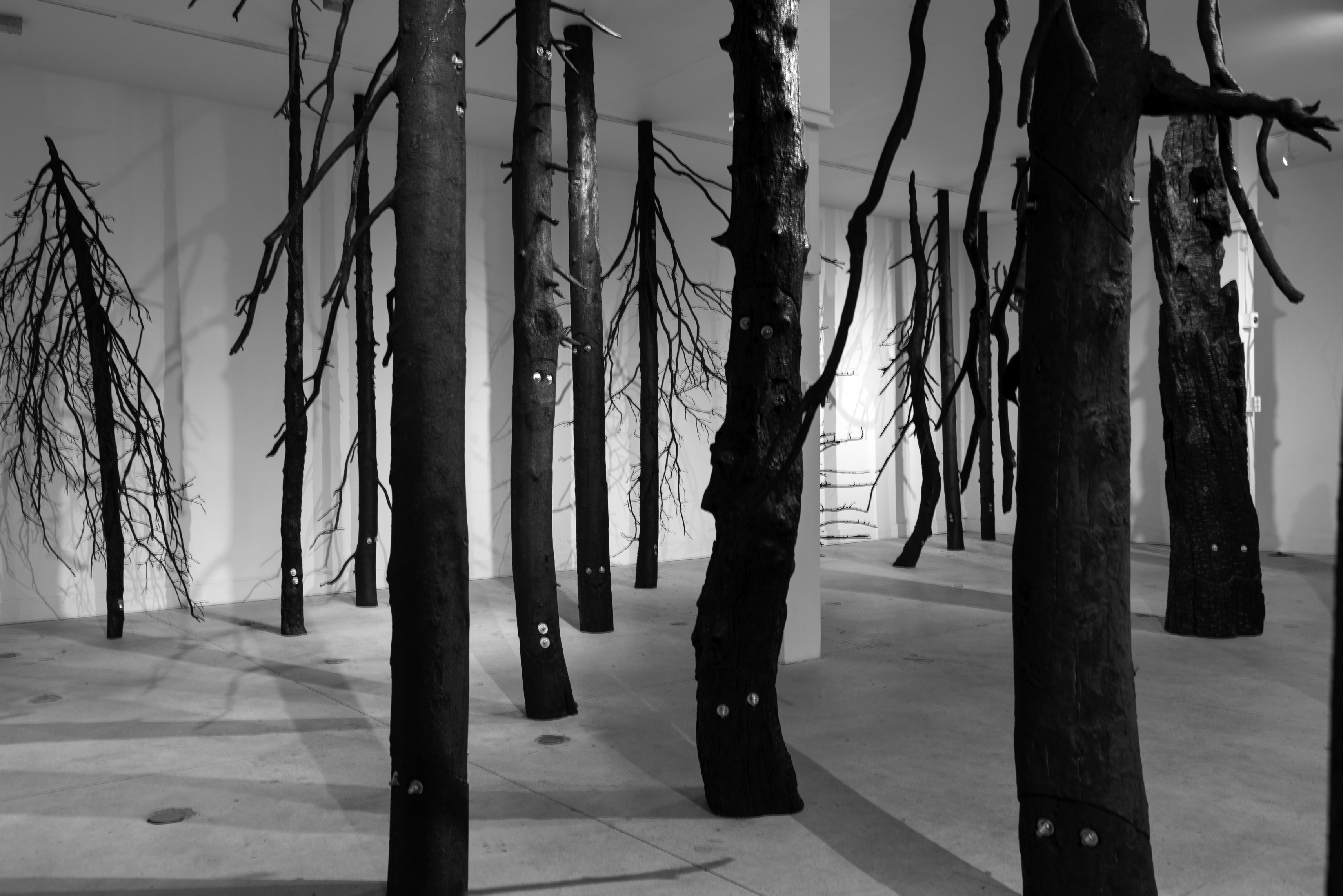 The project
Driving the route Idaho 21 is a great experience. Just outside of Boise, a volcanic landscape unfolds. The desolate landscape full of sage bushes in the south is slowly giving way to mountains covered with giant Ponderosa trees. I drive past the town of Idaho, a former mining village that looks like it comes directly from a film by Sergio Leone. A few kilometers away is a warning sign on the side of the road with the text 'Do not stop the next 15 mile'. The smell of smoke gradually becomes more intense and an apocalyptic landscape looms before my eyes. Everything around me has been burned, huge trees of more than 30 meters high stand out like charred sticks. The forest is reduced to a slope of black tones. The bottom strewn with ash. I stop taking pictures and suddenly I see the installation that I want to make.

Almost immediately stop one Sheriff to remind me that it is not allowed to stop. I take the opportunity to ask for contacts that I could use for my research and I get directions for a location where the firefighters stay during the forest fire season.

I drive on through the burnt forest; it is impossible to comprehend what such a violent fire can cause. At the camp of the firefighters - a few small tents in the middle of a valley - people sleep after 16 hours of continuous work. People on the spot introduce me to Jennifer Myslivy's Bureau of Land Management, the agency that can help me gain access to the closed forest area so that I can do my photographic research. I get her phone number; a satellite telephone that only works at the camp. There is no mobile reception in the forest.

A few days later Jennifer and I have an appointment in the morning to take pictures. At the camp in Green Valley everyone is super friendly and willing to inform me about the current forest fires. They offer to bring me to an active fire limit. An important lesson they give is how to emergency one nature shelter to use. Together with two other firefighters we leave the camp with a jeep, with enough water in stock. It is still chilly in the morning, but in a very short time it will become very hot and then water is an absolute necessity. We drive in the direction of the closed area; the landscape has a dramatic beauty. My preference to visit this burnt forest in the morning stems from my expectation that the light will be soft then. I do not want to emphasize the drama of the fire with my photos. I want those who look at my photos to see the natural forces of this process and something beautiful and pure. The light is soft and is filtered through thick layers of smoke. In the morning the smoke hangs very low because the cold air pushes it to the ground. Only in the afternoon does it rise, giving the fire oxygen and fuel it again.

My next important appointment is with Chris Boldman, Fire Management Officer at USFS for the Idaho Ranger District. He appears to be genuinely interested in my project and wants to help. A few days later he calls me with the news that the Idaho Ranger District has given me permission to enter the closed area for one day. A month of diplomacy is finally bearing fruit! I have a permit to collect the material for my installation. Chris and I meet again and discuss the logistics of collecting charred trees. I don't even have to ask for assistance; Chris already has an idea: he has been working with 15 for years smoke jumpers, the best qualified firefighters in the US. After I briefly present my idea, I have six volunteers. We need a trailer, chainsaws and ropes and we only have that one day, so everything has to be planned perfectly. The smoke jumpers work voluntarily for me on their day off, even their captain comes to help. They are great! Together we manage to collect more than 30 charred trees. By the end of the day, when we bring the trees to the Ming Studios, our faces and clothing are completely black. It was a tough day, but we had a lot of fun.

Now that the trees are on the grounds of Ming Studios, the rest of the work is completely in my hands. With the help of Travis and George, we start dismantling, labeling and preparing each piece of every tree before we rebuild it inside. The trees are cleaned with a brush, details are burned with a torch and they are sprayed with acrylic paint to protect the charcoal. When the pieces are ready we bring them inside. The title of the installation, Contrappoint - Italian for counterpoint - refers to the music term of the same name, in which two interdependent melodies, each with its own rhythm, are played together harmonically. I want the forest in the gallery space to become a composition of sculptural gestures that contrast with the space itself. The final installation consists of 25 charred trees that get their place between two columns of Ming Studios, each tree with its own identity, but as part of the forest as a whole. The photos are printed in black and white: one in large format and a selection has been collected in the publication Contrappoint.

De opening
The trees are in the middle of Ming Studios, like monuments, a totem of a forest that once was. They are badly damaged, but nevertheless give the impression of being alive, ready to shoot at any moment. At the opening it is unprecedentedly busy; a group of art lovers mixes with firefighters, curious people, local artists and students. A rather unusual group of visitors for an exhibition. Many of them have personal experiences with forest fires and the charred trees seem to touch a sensitive chord; many are moved by the memory of the dramatic hours they spent fighting the fire.

Forest fires are a recurring theme in my art practice, a theme in which new perspectives always arise. During my adventure in Boise, I discovered that there is an unprecedented human mechanism that bundles huge amounts of energy for forest conservation. Forests are crucial for the oxygen we breathe, for food and material, and provide the opportunity to recreate in our free time. Forest fires fiercely remind us of our dependence on nature. Fire is a powerful and natural element that can be used in a good way but can also be completely destructive. I think so many people in Boise were touched by it Contrappoint because the installation uses a clear vocabulary with which it evokes a memory of the complex relationship with the forest and the fire that can threaten with destruction or incite rebirth.