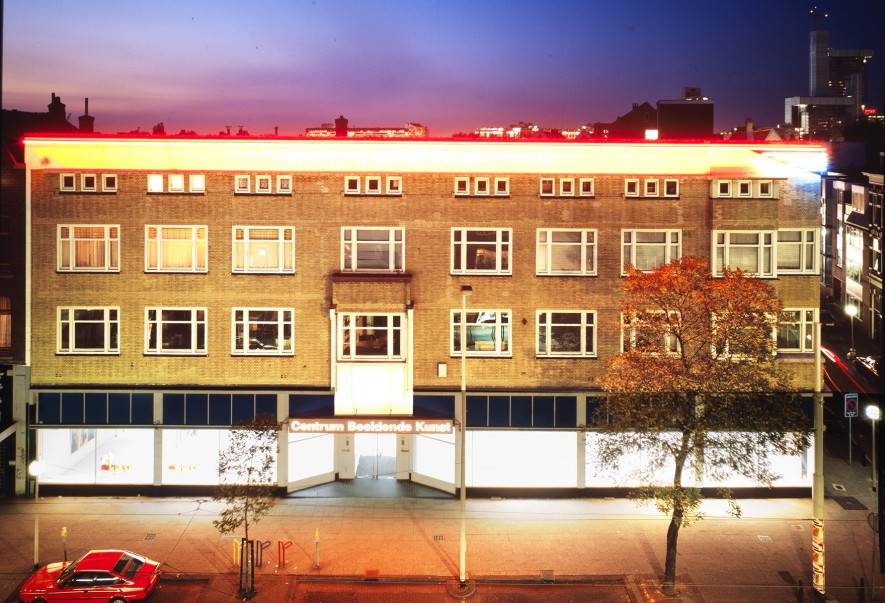 With the exhibition Nuts & Bolts in the context of the International Film Festival Rotterdam 2017, a striking period of the building will end at the Nieuwe Binnenweg 75 as an art location. In 1982, so now 35 years ago, the newly established Center for Visual Arts moved into the building that at the time was mostly known to enthusiasts of big American sleds such as Buick and Chevrolet. At number 75 at Pietersen & Co's Automobielbedrijf, the newest models were shining in the large modern showroom.

The implementation of the then existing Visual Artists Regulation (BKR) and the Percentage Regulation (art for buildings) were placed with the Center for Visual Arts. And to involve Rotterdam residents more intensively in the visual arts, the Rijnmond Artotheek Foundation, which has been operating in Delfshaven since 1975, was also included in the municipal center for Visual Arts. "First American cars were sold here," Alderman Pim Vermeulen said at the opening, "and now there is enough room to sell the visual arts." 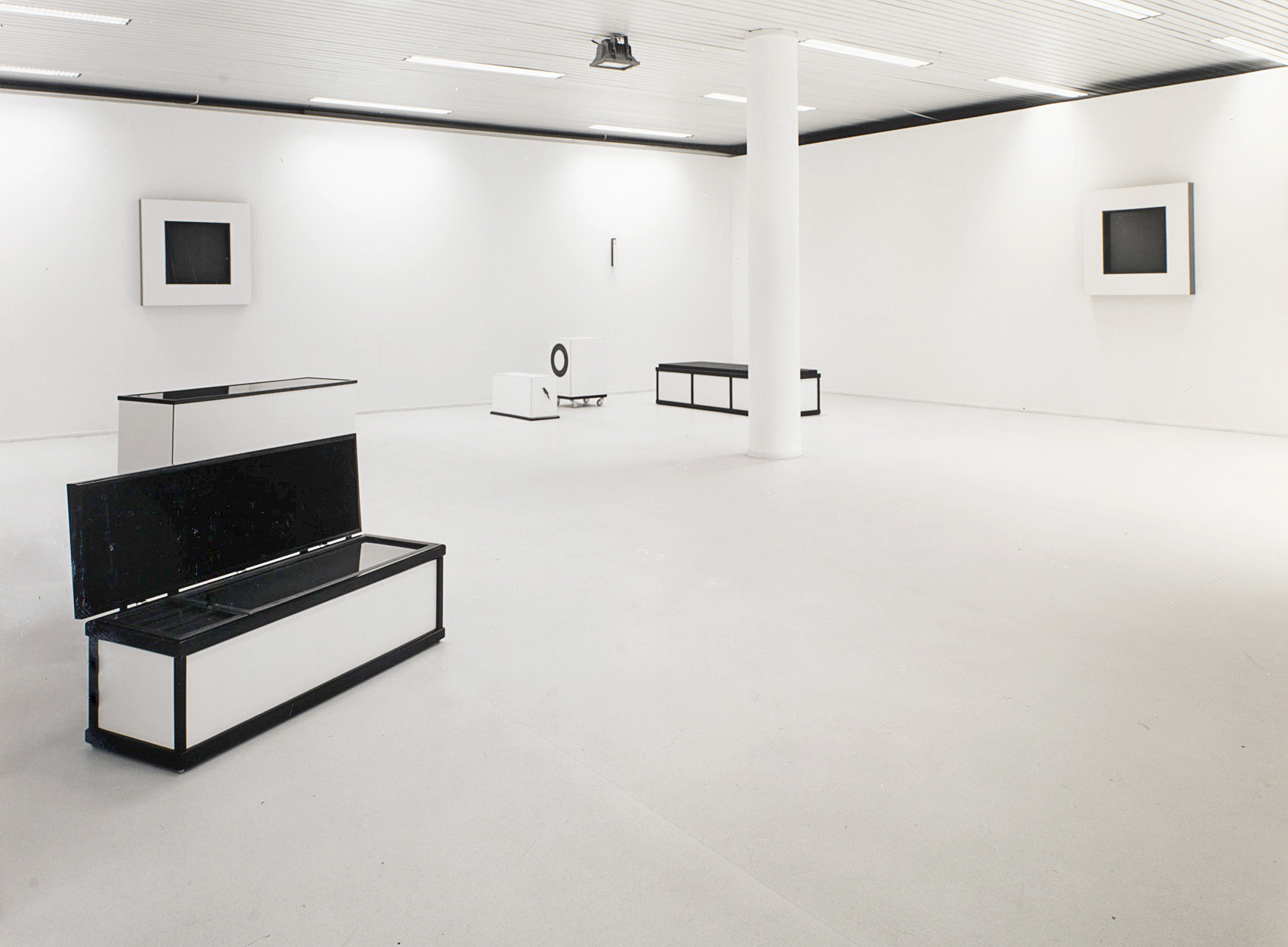 For the general public, it all really started after a major makeover. The art-deco details in the building that were somewhat difficult to incorporate for the modern arts were concealed behind fresh white plates and above the entrance was a sturdy red and white lettering designed by the Hard Werken agency. The breeze of programming in those early years was the installation Occasion cars (1984) by the then controversial Belgian artist Guillaume Bijl, a showroom full of shiny cars as if Pietersen had returned from the Waalhaven.

The contemporary era began in the year 1987. The BKR was abolished and with the money released the Rotterdam visual arts institutions set to work on the basis of the bill Visual Arts in Rotterdam. This is how the City Collection of Museum Boijmans Van Beuningen, the Kunsthuis, which later became Witte de With, became the Center for Contemporary Art, and in September 1987 CBK Exhibitions at the Nieuwe Binnenweg 75, as the precursor of what is now TENT.

In 1987 the 'slumbering giant' woke up, because that was how Rotterdam was seen in the eighties. Complete batches of graduates from academies in Enschede, Haarlem and Maastricht went to Rotterdam, because there were plenty of affordable studios here: beautiful school buildings in the middle of the city, great sheds in the harbor area that was just around the corner when viewed from the center, many now still existing artists' initiative, such as Kunst & Complex and Kaus Australis, started between apartment-high stacks of aluminum rolls. Living space was also no problem. There was a lot to be done and everyone did it. If that wonderful myth of the rolled up sleeves did not already exist, it would have been invented by the artists in the 1980s. It was wonderful to be in that 'cultural wasteland' as Willem Oorebeek later described the Rotterdam of that time.

The elaboration of that note Visual Arts in Rotterdam caused the visual arts in Rotterdam to accelerate from 1987. For artists there were various subsidy options at the Center for Visual Arts: projects, documentation, exhibition, development & stimulation, purchases. And also the new exhibition space on the Nieuwe Binnenweg 75. The central assignment of CBK Exhibitions was 'to pay attention to young Rotterdam artists who had not had much opportunity to exhibit and whose work was convincing in terms of quality'. In the period from September 1987 to May 1994, solo and duo exhibitions were organized of a total of 64 Rotterdam artists, with a monographic publication for each artist that could be used to highlight his or her work. 'A local super gallery', as it was called by Dolf Welling, the then art critic of the Rotterdams Dagblad. 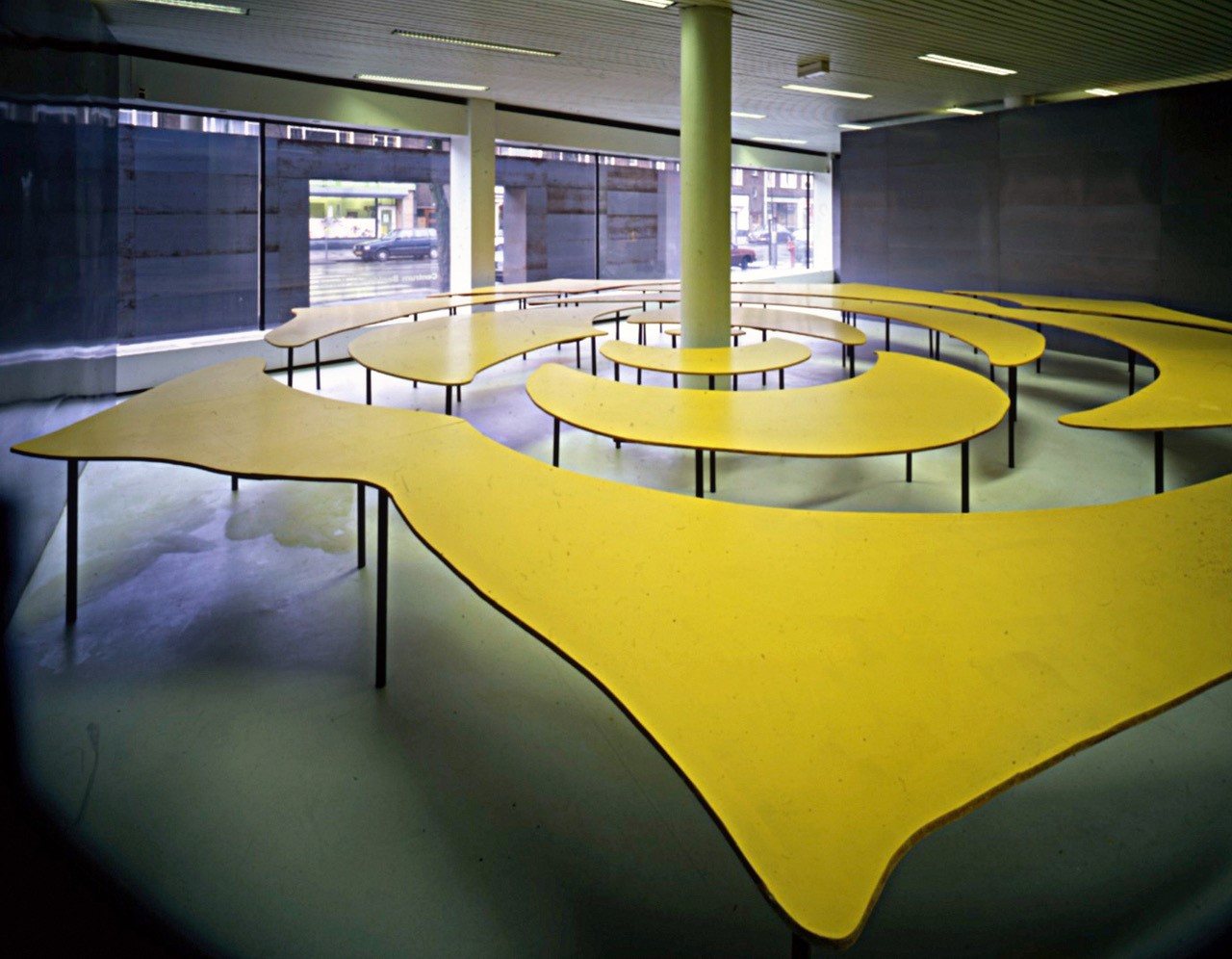 For the Rotterdam artists of that time, CBK Exhibitions was a springboard to national or perhaps international success. In any case, it was a place where space was given to the artist, without theory or compelling story. A place where visual artists could do what might not have been possible elsewhere, a kind of free zone. In that large showroom on the Nieuwe Binnenweg, many artists who are still active today have adjusted the space to their own taste. At the start of 1989 Liesbeth Bik, for example, exhibited her paintings, silent and strict, spaces with endlessly seeming perspectives. Or two years later Han Hoogerbrugge with his installation Tasty-Quiet-Fine, objects that directly referred to objects that play a role in our daily lives, but which by their appearance and arrangement assumed almost theatrical proportions. Or in April 1992 when the atmosphere of absence and memory reigned in the photo works of Ine Lamers. So close to the skin, almost sweaty, like an unceasing pas-de-deux around desire. Also one of the memorable moments, in January 1990, was the intervention of Herman Lamers who took to the streets with his installation, an imposing wall covered with metal plates as an architectural answer to the enormous windows of the exhibition space. During the build-up, on January 25 1990, a very severe storm (also called Hurricane Daria) raged over the western part of Europe. All that life was brought to a standstill that night, public transport was no longer running, trees were uprooted, trucks were blown down. On that day, Lamers had built his wall on the Nieuwe Binnenweg, the storm increased, the wall began to move dangerously, metal plates were torn off and shots like razors to the other side of the street. Between 17 and 18 hours, when the storm was nearing its peak, Lamers and a few people (including the then city curator) threw ropes around the wall, with five men hanging on the wall to protect them from an altitude flight. Yes, those were great times!

In the fall of 1994, CBK Exhibitions left for Westersingel and continued under the name Villa Alckmær. From that moment on, a different programming with Rotterdam artists was continued on Nieuwe Binnenweg under the direction of Willie Stehouwer, later one of the image-defining curators of TENT. Perhaps the most remarkable of those days was the performance festival De TV Shows under the care of Wink van Kempen. In the mid-eighties, Van Kempen had four festivals under the title of Lantaren / Venster, which was then just around the corner in Gouvernestraat. Perfo organized. With this he had shown Rotterdam the international nose of salmon in terms of performance art. 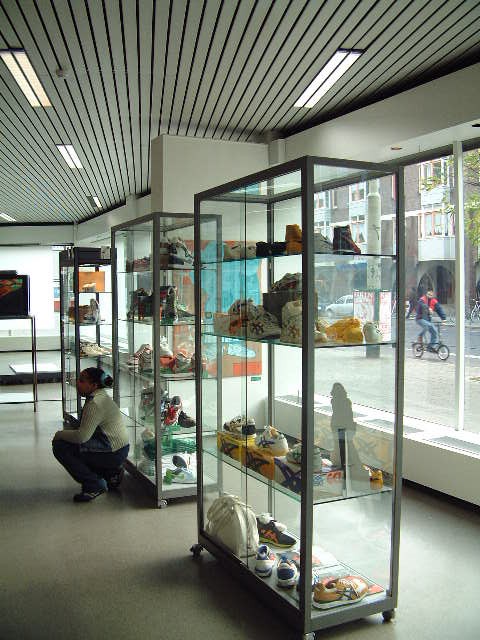 With the launch of TENT on 9.9.99, the Center for Visual Arts fully focused on the new location on Witte de Withstraat in terms of presentations. On the Nieuwe Binnenweg, more space had already been made available for activities of the Artotheek since 1994, including the project set up by Christa Deen Tactile? Touching is desired! (1996). The lifeless skin of a shepherd dog in a Chesterfield armchair led to fierce protests and even bullet holes in the window. In addition, presentations from the BKOR (Visual Arts and Public Space) department started in the beginning of this century, highlighting trends in Rotterdam's youth culture. The popular exhibitions of that time included an overview of the hip-hop collective BadBoyz Inc (2001) and Sneakers; Fresh Still Life (2005), an exhibition about the sneaker as a source for artistic inspiration, compiled by Fleur Kolk and Charlie Porter. It turned out to be one of the most visited exhibitions ever at the Center for Visual Arts.

In 2007, the premises of the Center for Visual Arts were enriched with an iconic addition from Krijn de Koning. That year, he received the prestigious Sikkens Prize in the Van Nelle Factory and board member Sjarel Ex of Museum Boijmans Van Beuningen inquired at the Center for Visual Arts whether De Koning, on behalf of the Sikkens Foundation, could not realize a work somewhere in the public space of Rotterdam . That became the facade and interior of the Nieuwe Binnenweg 75. The striking green object folded inwards over the facade like a three-dimensional drawing and transformed into a multifunctional stage. For about five years, this object marked the Center for Visual Arts on the Nieuwe Binnenweg and that stage created new possibilities and collaborations for performances, debate and presentations, but it was also discovered by young designers and filmmakers who used it as a decor, because the green space worked perfectly as a chromakey. On 9 June 2010, with equal ease, the stage was transformed into one of the Rotterdam polling stations for the parliamentary elections. An employee of the Center for Visual Arts, who unsuspectingly wanted to take a look, was dismissed because he was wearing a T-shirt from the newly established Pirate Party. 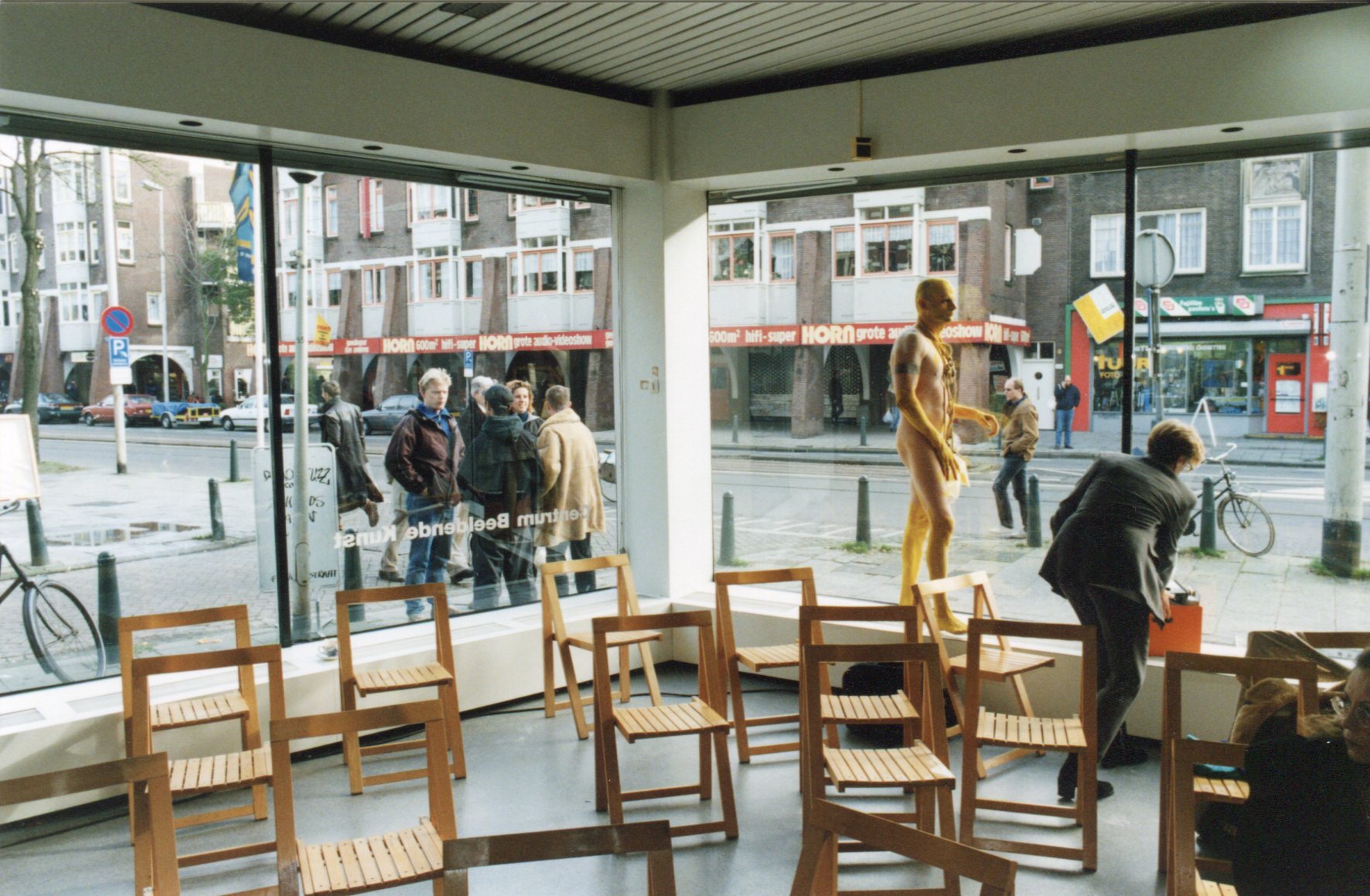 This new impetus, including many debut presentations of young talent in space Right behind (Iwan Smit, among others, whose work was purchased by Museum Boijmans Van Beuningen last week), abruptly stopped moving the Center for Visual Arts to Eendrachtsstraat in April 2013. It was forced to do this by a substantial cut in Rotterdam's cultural policy. The last chapter of the Nieuwe Binnenweg 75 also started as an art location. The Artotheek, now known as Art lending, remained behind, because it was decided to let it stand on its own two feet again. In April 2017, which is indeed such an 35 year after the merger, the Kunstuitleen, with its new location on the Goudsesingel, will definitively separate itself from the Center for Visual Arts, which is now known as CBK Rotterdam. The circle is now nicely rounded in another way too: in the final exhibition Nuts & Bolts curator Edwin Carels has the work Composition trouvée (time clock) from Guillaume Bijl, a homage to a place that 35 has provided for years for the best that Rotterdam art had to offer in those years. From showroom to time clock, if that doesn't mean anything.