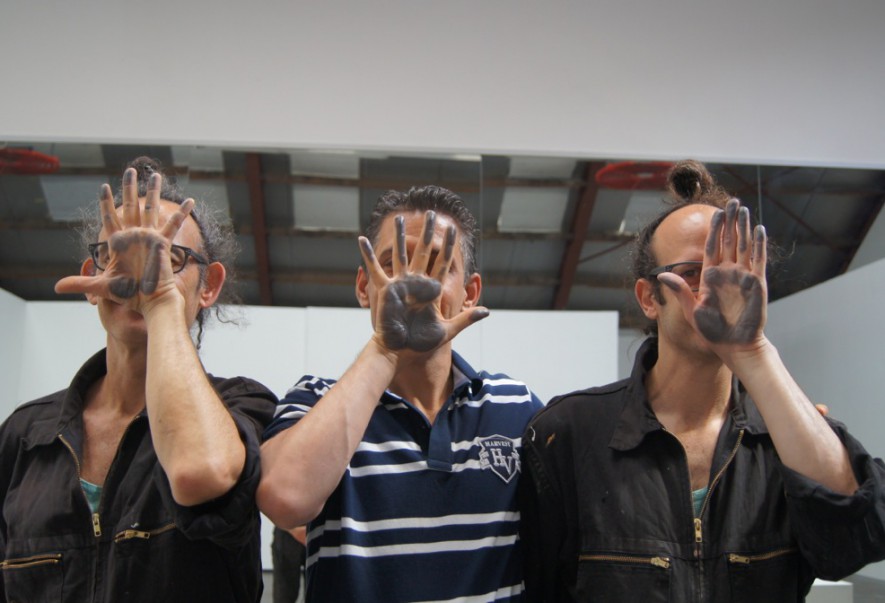 For their project MG&M Collective Gil & Moti received an R&D contribution from CBK Rotterdam. Sandra Smets spoke to them about this project in November 2016.

A painting, a two-channel video installation, a photo series and it remains to be seen - in their workshop in Charlois, Gil and Moti list the components of their latest project. MG&M Collective it is called, whereby one of the Ms stands for the name Mosab Anzo, an artist who fled from Syria. In Aleppo he had a thriving practice, in 2014 he ended up in Rotterdam via a complicated escape route. Gil and Moti met him there last year at Art Rotterdam, where he had a small presentation as an abstract lyrical painter. He came on their path at a time just when they started looking for refugee artists. And that, that search, is in turn a consequence of other projects.

At Gil and Moti, projects often run parallel, with mutual commitments, so that they can work on it for a longer period of time. A number of them included the refugee shelf. They talk about this working method at the end of November 2016, not long after their exhibition at the Nederlands Fotomuseum The Dutch Volunteers opened. This is about their stay in the West Bank, where they have been working intermittently for both camps over the past two years, hoping for more understanding of the polarized views. And oh yes, they have also just been invited to an artist-in-residency in Brazil from March 2017. Isn't that a bit much? "It helps to switch from one project to another, then your perspective changes," they respond with a perspective. “Sometimes we put a project on a lower heat for a while, then resume it. The Dutch Volunteers was so intense, then it helps to be able to take some distance. " 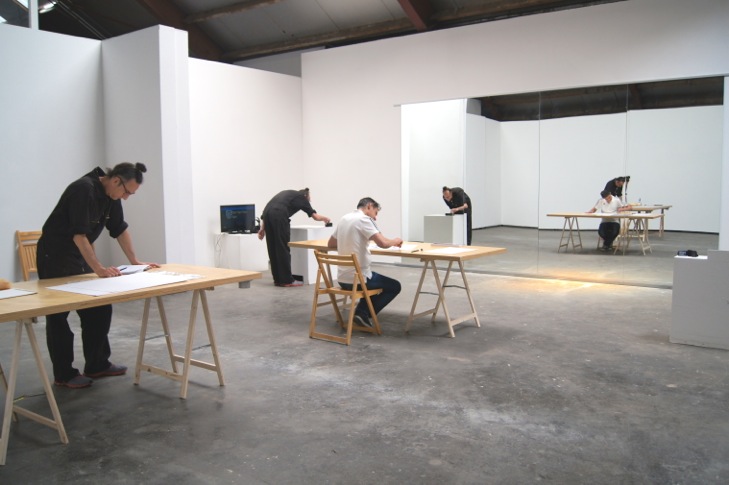 Moreover, it helps that the always time-consuming projects are interrelated. You come from one to the other, they explain. In earlier exhibitions, they came into contact with refugees and their flight stories - so that they became increasingly involved with this theme. In Stockholm and Basel they have already done projects with refugees, whom they met there. Unplanned projects, social sculptures, in which they entered into a conversation to see how you can get around in someone else and help someone.

"If we experience such a meeting, then we drop everything and we start working with it." That means clothing, shelter, and in the meantime they make works of art with video recording. But collaboration on an artistic level with a refugee artist can contribute to both art and the refugee debate. In the meantime they returned to the Netherlands to look for refugee artists, visited exhibitions, but saw no substantive reflection on migration, identity, and decided to develop a model for this themselves.

They decided on one artist-in-residency at New Dakota, to meet several refugee artists in a performative situation. But it became Mosab. “He was open to everything, showed an enormous interest. Thus we have drawn, photographed, and moved into each other. We are not interested in abstract art, but together with him we started to look at abstract art in museums, to compare his poetic approach with this European art history. ”

That became a matter of looking around a lot where Gil and Moti approached their contacts for Mosab, in order to give him access to the system to which they have access after eighteen years in the Netherlands. That gives him a network and gives the collaboration equivalence that is essential to it MG&M Collective. In the meantime, they talk and sketch a lot, because even though Gil and Moti are the directors in the first instance, it was important to work on a situation in which they are equal.

This collaboration led to a number of works of art that are now in the making - painting, video, and photography. "In Mosab's opinion, we supplemented the plans with a photo series in which he looks at art - the look of the refugee in the Netherlands, as a back figure in which you as a spectator can move." The video is a dialogue on two cameras - a journey along Schiphol, Ter Apel, a Syrian dinner, Cobra museum. This includes a heavy theme, but with a playful approach. In 2017, the whole will premiere as an exhibition in New Dakota in September, at the opening of the cultural season. An exhibition in which the abstract refugee issue regains the human dimension. This contains existing individual work by both Mosab and Gil and Moti, and with new work that the three of them made. "This makes the exhibition a triptych: about the past, present, and who knows the future."