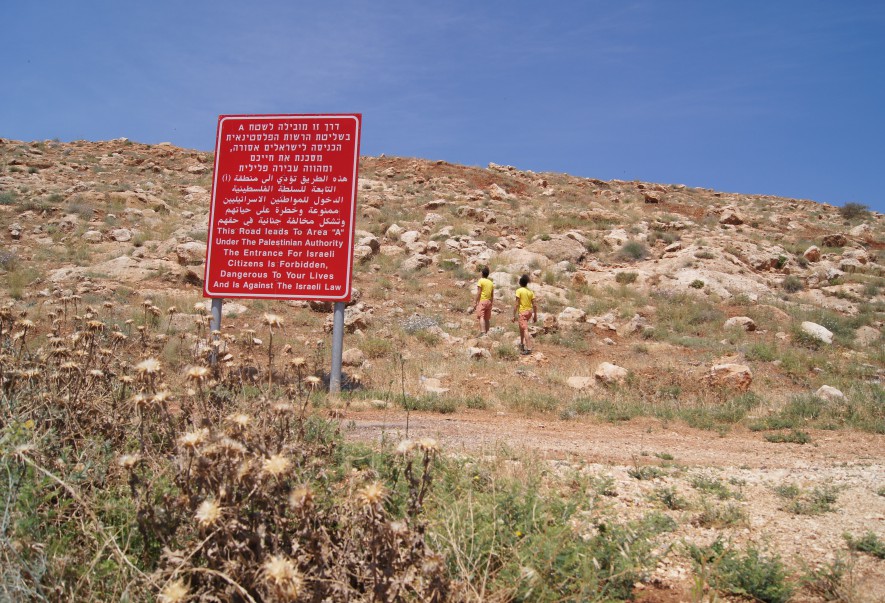 Got in 2013 Gil & Moti promised an R&D contribution for their project The Dutch Volunteers.
From November 5 2016 presents it Dutch Photo Museum this project.

For this project, the duo volunteered for an Israeli settlement and for Palestinians in the West Bank. To be allowed to work as a volunteer in both areas, the artists made a radical decision: they gave up their Israeli nationality to become Dutch. With the newly acquired nationality the possibility arose to visit both sides, something that is impossible with an Israeli passport. In both Israel and Palestine, they did volunteer work and had informal conversations with their hosts and women. With the smartphone they made many video recordings and photos of it. This work has resulted in a spatial installation with video, photography and sculptures, in which a physical as well as symbolic separation is made between two worlds.

Gil & Moti stayed in the West Bank for a long time to gain more insight into what it is like to live in a war zone. In the Jewish settlement they helped build an ecological house for the Jewish Ilan. This house is in a controversial place, without an official building permit. In Palestine they participated in the construction of the new house of Eyad, whose former house had been destroyed by the Israeli army. Partly as a result of volunteering, Gil & Moti gained a better understanding of Palestinian life - characterized by limited freedom of movement - on the one hand, and the conviction of Jewish settlers on the other. These experiences have led to an artistic and philosophical analysis of the concept of 'home': when is a house a fundamental human apparatus and when does it project an ideology? When does it display power and when does it provide shelter? In a spatial video installation the conversations with different people from the Jewish and Palestinian community about apartheid, freedom, violence, economy, survival and dreams are shown. A physical separation in the installation emphasizes the way in which these communities live side by side.

For the publication Research & Development (2015) from CBK Rotterdam Sandra Smets interviewed them about this project:

'Willing to Give you Everything' can be read on the front door of Gil and Moti's studio in Charlois. It is a faded invitation card, from an exhibition years ago in Budapest. But their desire to give something to others through their artistry is still evident inside. Their studio is full of photos and materials from the West Bank, which they have just returned from a few weeks. “We stayed there twice for two months. First with Jewish settlers in the occupied territories, who helped us build houses. Then in Bethlehem, where we helped Palestinians with odd jobs, workshops. ”They still sleep badly, they answered when asked.
Because they worked there during the shelling: Israel had invaded the Gaza Strip, which they had not foreseen when they decided to implement this plan in 2013. It only made their project more urgent. “We had wanted to go to the settlements for some time. Always, "says the originally Israeli artist duo. “Every Israeli would have to spend a month in Palestine every year to get to know the situation there. Life was tough there: a lack of everything, freedom, bread, water. It was difficult, but it felt good, because we did good, volunteer work, and tried to deepen ourselves. ”

The studio smells of straw, in the same mud with which they built the house on the West Bank. Just like there, they keep the tools in former ammunition boxes, a bullet is next to it. 'Death to all Arabs' is written in Hebrew graffiti on one of the large photos in their studio home. Gil picks up a bullet, which was in the ammunition box that they use as a toolbox with the Israelis. They show grim videos, in which you feel hatred and violence in the background - interviews with Palestinians and Israelis.
They want to use their work for social purposes. But for both camps? “As artists we are interested in the opinions of others. We wanted to know what people think about now and the future. We want to show that with our project. And don't avoid uncomfortable experiences. We wanted to know why people are mean and hypocritical. ”And why is that? They are silent. Hesitant: “Every person has a different relationship with the world around him. You can choose what you see and know. And what you want to add to life and to the world. "
It taught them a lot about life there, about the tragedy and about the possibilities of finding happiness there. And they returned with a lot of material: photos, objects, stories, videos. “Everyone wanted for the camera. But a dialogue will never be possible there. There is a wall. "

For Gil and Moti the project fits in with their earlier work, when they volunteered at Islamic entrepreneurs in Rotterdam and elsewhere. But different this time was that this was a long-term project, without a predetermined goal. “It takes a long time, the reason that we sought support from the Mondriaan Fund and the CBK. You want a partner that enables you to fully implement this project, independently, without pressure from an exhibition. You do not have to think beforehand if it will work, where it will lead, or whether people will understand. You must dare and be honest. That such parties support you is also a confirmation of trust, which is also necessary. ”They do not yet know where it will lead. But they would prefer to show it in Israel as an exhibition. “To perhaps start a debate there. That is a future plan. Ever."

The project The Dutch Volunteers is exhibited in the dutch photo museum from 5 November 2016 to 1 January 2017. On Saturday 5 November 2016 at 15: 00, Gil & Moti will open the exhibition with a performance.

The Dutch Volunteers has been made possible with financial support from the Mondriaan Fund and an R&D contribution from CBK Rotterdam.