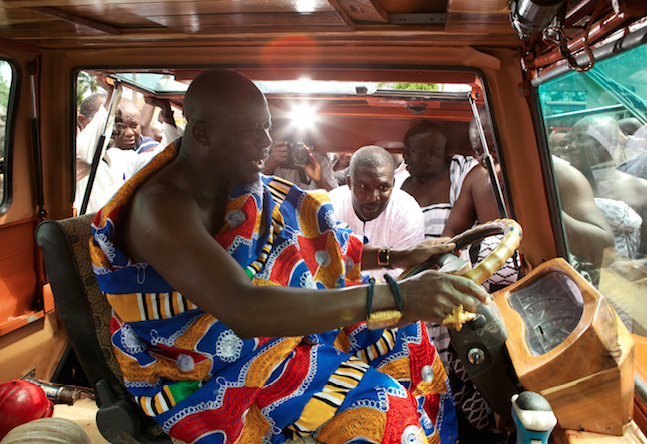 Eliminating risks is disastrous for discovery

The Rotterdam artist followed with the plan to reconstruct a classic car Melle Smets (1975) and sociologist Joost van Onna (1976) the trail of discarded Western car parts. As a result, they eventually ended up in Ghana, in the Suame Magazine district. In that car district, the scrap metal is processed and traded by such 200.000 highly specialized technicians in 12.000 informal workshops. Smets and Onna decided to turn this track around 180 degrees: together with local engineers they started to produce the first car ever to be exported from Suame Magazine to the West. After even the king of Ghana had seen it with his own eyes, it was clear to the Ghanaian media: these benefactors are going to provide Ghana with a car industry.

In 2012 and in 2015, Melle Smets received contributions for parts of this project in the context of the R&D scheme. Monica Verhoek interviewed him about this.

Discarded cars go to Africa, but what happens if you work against the current? If you bring a car from Ghana back to the West. Visual artist Melle Smets built a car in Ghana and took it to the Netherlands. 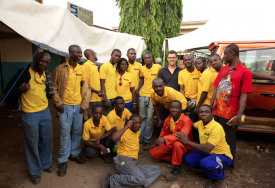 Detroit
Years ago Melle Smets walked through Detroit. The textbook example of a city of millions that emerged and perished with only one type of activity; the automotive industry. In the '50 it was home to Ford, Chrysler and General Motors and Detroit was America's fourth city. Due to the crisis and increasing competition from Japanese cars, the city collapsed and turned into a ghost town. Melle Smets: “I walked through the streets there and thought: the automotive industry that once flourished here is about the same age as that of Suame Magazine in the Ghanaian city of Kumasi. A city that lives almost entirely from old discarded cars from the west. About 200.000 people work in 12.000 workshops. It seemed like communicating vessels. That thought never left me. Ghana: a totally different biotope than the former Ford city. What can I learn and understand from this? Why don't people produce cars there themselves? Can I show this in a project? " 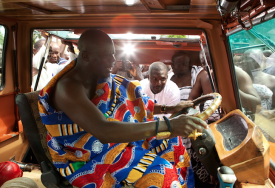 Slow but strong
Together with researcher Joost van Onna, the idea arose to build a car with the people there and to drive that car to the west, read: the Netherlands, back. Smets: “I started looking for funds and I eventually received an R&D contribution from CBK Rotterdam to implement the project. Once there, we collaborated with local engineers, students from the Rietveld Academy and the technical university of Kumasi. We designed a car made from parts of old cars with both front and rear and a cargo space and called it: Turtle 1. In the Ghanaian culture, a turtle stands for old age and strength and in addition, the car cannot go faster than 80 km per hour. Slow but strong just like a turtle. We had him sailed to the Netherlands and even stood there at the car fair with the car. Our little car, made from parts of old cars, stood there in stark contrast to the shiny, expensive cars that stood there. There were also mechanics from Africa - who had contributed to the construction of the car - at our stand. They were proud, that was beautiful. "

Question the world
There was also criticism: the Africans who participated in the project had been told that it was the first car of a whole series of cars. Perhaps the start of a new African car industry, the rumor went round. What did Melle Smets think? 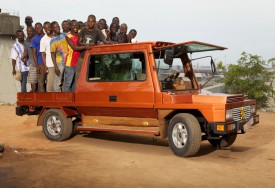 Smets: “That has never been the case. I am not an activist or benefactor; it is an art project and not a development project and I never wanted to make money from this project. I want to question the world. It is interesting to tilt social systems by turning them around. Detroit is a city where the car industry has moved out and Suame Magazine in Ghana where the car market does its work in a completely different way. A world with parallels, but with different systems. We live in a system society, I have nothing against that, but I can be mesmerized by the logic of a system. In the Netherlands we go a long way. Trees in my city of Rotterdam are all numbered, all have a CV and some even have a criminal record. For example, a branch has fallen on a car and that is immediately registered. All this to create predictability. It has advantages: it is efficient and safe. But I also want to look at other values: it is often overly organized and therefore the self-reliance is hard to find. If you do not take risks, what else can you discover? How do we proceed with systems? How do we build a culture with it? That is very different in Africa than in the West. That is also a learning process for us. If you look at Dutch universities, you can see that all risks have been removed. Universities are learning factories. It is determined as efficiently as possible in how many years you must have earned points. It is a breeding program for knowledge development. But aren't we making the breed sick? How do you get on the beaten track if you get everything in bite-sized chunks and you avoid all risks? Don't we miss something?
Together with Utrecht University we have established the Department of Search. Here we give artists the opportunity to ask open questions to the university search engine. We use the knowledge and search power of scientists and students. In return, we participate in the strategic themes that Utrecht University is working on, a sustainable future for the whole world. We bring those big abstract themes to the campus by the place itself test site to bomb. On October 11 we are setting up a handmade shed in the middle of the Science Park where artists make and exhibit their prototypes.
Artists are not looking for solutions, such as scientists. The idea of ​​making a car out of old materials may not be new, but to do it in Africa where the West dumps its cars, triggered me huge. It doesn't solve anything, but by tilting it, it gives a different view of reality. With the Department of Search we also try to search, ask open questions. I want to keep looking for a world with new contexts, where invisible walls become visible and where we do not avoid risks. ”