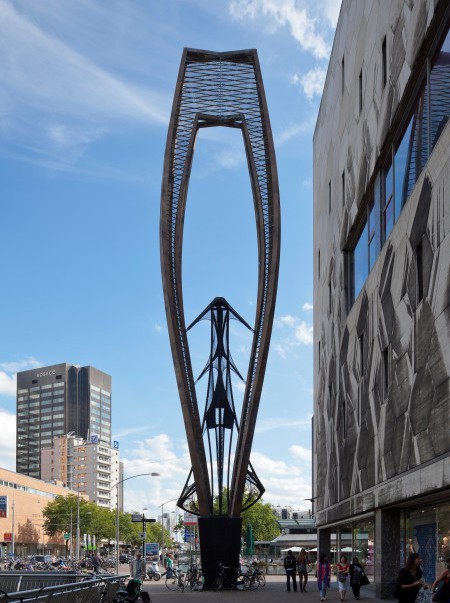 Gabo is being refurbished

The artwork by Naum Gabo on the Coolsingel, popularly known as 'De stylized bloem' or 'Het Ding', is being restored. "I am delighted that this National Monument will once again have the appearance that belongs to this central location for the Bijenkorf on the Coolsingel," said Alderman Pex Langenberg of culture.

Last year, the owner of the work of art - Bouwfonds Investment Management - and the municipality of Rotterdam held intensive consultations on the desired restoration. Based on earlier investigations commissioned by the owner, the latter has decided to restore the sculpture and to discuss this with representatives from the municipality and the Cultural Heritage Agency. This led to the submission of the draft application on 25 last July. Next Wednesday, the first step, the action plan, will be on the table for advice at the Committee for Welfare and Monuments.

The large sculpture, with the nicknames 'The stylized flower' and 'The Thing', is part of the De Bijenkorf complex. The statue was made in 1956-1957 based on a drawing and models by American artist Naum Gabo from Russia. The work took place in the 'Hollandia' construction workshops and machine factory in Krimpen aan den IJssel. The artwork was unveiled on 21 in May 1957. It is about the largest modern artwork in public space at the time. The National Monument is considered a milestone in the visual arts of the Reconstruction period.

The municipality and the owner are aiming for a well-documented restoration, the aim of which is to restore the original appearance of the image as much as possible, using original techniques.

Restoration has begun with the submission of the action plan. The owner expects the restoration to take around a year.

Gabosingers during North Sea Round Town Sculpture International Rotterdam has been paying tribute to ZT (1957) every Friday afternoon for the past two years, and the worldwide famous statue of American Russian artist Naum Gabo. Gabo made this work for De Bijenkorf and gave the city of Rotterdam that was still in ruins in those years a symbol of courage, hope
Z-files XL: the unique art collection of Rotterdam Multi-day event about artworks in the Rotterdam street scene
Coolsingel as a Monument A special tour of the Coolsingel in the context of the Futurosity Summit.
Become a friend of Naum Gabo Become a friend of Naum Gabo