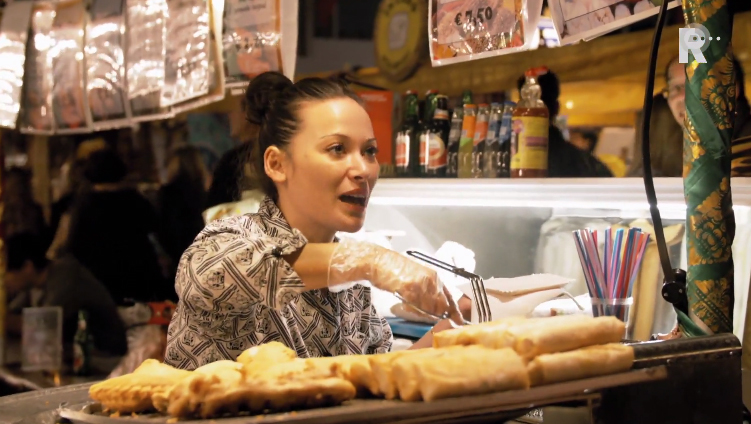 How do you make a new place your home and how do you become a Rotterdammer in a city with 170 nationalities? In the series Limitless Rotterdammers journalist Dore van Duivenbode visits various communities that have settled here in the last eight decades. How did they become Rotterdammers and how did Rotterdam turn into a world city? From June eight episodes were broadcast on local television. CBK Rotterdam contributed to the creation of the series, which was commissioned by OPEN Rotterdam and RTV Rijnmond.

1. Start over
Even before Rotterdam was destroyed, several migrant groups had made a home here. They also had to start again after the bombing and laid the first stones of the Reconstruction, literally or figuratively. The Scots were found in Rotterdam more than three hundred years ago and they founded their Scots International Church. After the bombing, they built a new church behind the Witte de Withstraat. Marion Pot was there from the first stone. In 1922, the Betti family was the first Italian family to open an ice cream shop in the city and later also sell pizzas. Today, great-grandson Bruno Giuntoli is in charge of the daily operations. Bob Weerman works as a rower at the KVRE in the port of Rotterdam. He is a quarter Scottish and quite proud of his roots.

2. Warm welcome
After the independence of Indonesia in 1949, hundreds of thousands of Indian Dutchmen came to the motherland. Some returned to their homeland, others had never been here. Some four thousand Moluccan soldiers also came to the Netherlands on command with their families. They fought for the Netherlands and were unsure of their lives in Indonesia. The (temporary) establishment of the Indos and Moluccans in the Netherlands was not accompanied by a warm welcome.
Olympia Latupeirissa protests against the commemoration of the 65 year of Moluccans in the Netherlands, Carel Banse is committed to an Indian monument, Christie Haalboom is working on the INDO program series and Distefano Noya is continuing the fight for the independent Moluccan state. They each work in their own way for the recognition of the last piece of post-colonial history.

3. In Transit
From the 60 years on, the first Cape Verdeans came to Rotterdam as sailors under the Dutch flag. At the same time, the first Spanish guest workers also came. The ports grew like cabbage; there was enough work. For the Cape Verdeans, Rotterdam turned into a home, but most Spaniards returned home after work.
Stanis Ramalho was one of the first Cape Verdeans in Rotterdam. He opened a boarding house for other seafarers to get hold of solid ground here. Arturo Corral also came in the sixties and started to work for his Spanish countrymen. Lilian Cardoso and her example Tomasia Teixeira teach Cape Verdean women to become more assertive and to get past the 'silent migrants' label. Elisabel Castaneda teaches dance at the last Spanish association in the region.

4. A new home
Family reunification brought Turkish families to Rotterdam in the 1970s. And due to the independence of Suriname, Surinamese moved to the Netherlands. How did they make Rotterdam a new home? Mildred Korstam supervises the Surinamese senior group Ajuma and makes a weekly radio program to keep in touch with the elderly. Veyis Șenyürek is chairman of the Orkide residential group, where 25 Turkish families live, who had come to Rotterdam as guest workers. Social teacher Halil Karaaslan tries to get young people to define their own definition of success. Lloyd Hunte has the first Surinamese porters' association in the Netherlands and brings the deceased dancing to their final resting place.

5. An Audible Voice
In the 1980s, the Chileans fled the Pinochet dictatorship and the Moroccans sought a place to practice their faith. How did they make their voice heard in Rotterdam?
Looking for a larger space, the Moroccan mosque association An-Nasr took over the vacant Mathenesserkerk in the 1980s. Hajj Reyani has since been calling for prayer. In the Essalaam mosque on South, imam Azzedine Karrat tries to bridge the gap between his community of believers and the rest of the neighborhood.
Artist Juan Heinsohn Huala fled with his family from Chile during the Pinochet dictatorship. He tries to connect people through art and culture. In the HipHopHuis, Juan's daughter Lisa and her club Sprakuhloos are busy with an open mic evening.

6. Lost country
Because of the Balkan war, Yugoslavians sought refuge in Rotterdam. Antilleans also came to the city in the nineties for a better chance of work. How did they find their way in Rotterdam?
Mairee Scheepers Bishop came to the Netherlands for family visits and has had a hair salon on the Groene Hilledijk for 18 years.
Baseball coach Melfried Comenencia was sent to his uncle in Rotterdam as a child and tries to save other Antillean youth the same fate as a coach.
Math teacher and musician Emil Kunto lost his country Bosnia and ended up in Rotterdam where he had to build a new life.
Marinela Petrusa was born in Rotterdam as the daughter of Yugoslavian guest workers, but suddenly had to call herself Serbian-Croatian.
Maja Stefanovic runs a bar on the Vierambachtstraat, where all the former Yugoslavs feel once again.

7. We are all Bruder
After joining the EU, a new batch of Poles came to Rotterdam from 2004. A few years later, Bulgaria also joined. How do they achieve their European dream?
Monica Raczek studied law in Poland and, like her husband, came to the Netherlands for better employment opportunities.
Petia Ivanova already came from Bulgaria to Rotterdam 18 years ago and is helping other Bulgarians on their way.
Ventsi Shopov is a handyman and was helped by Petia to work in the Netherlands.
Joanna Smolarz came to Rotterdam from Poland for her lover and fell in love with the Maasvlakte.

8. Beyond the limits
Nowadays, Rotterdam has become a tourist destination. The fact that we have come this far and created a brand new city also has an appeal to people who want to start a new life in Rotterdam. From Syrian refugees looking for something to Chinese expats who come for architecture and trade.
Yan Zhang came from Shanghai for a master's degree to the Willem de Kooning academy and commutes back and forth between these cities in search of cultural exchange.
Nebras Salheb evaded conscription in Syria and moments later the war by studying in the Netherlands. He recently started working at an architectural firm.
Annie Tao was sent to Europe with her family to set up a new branch of the Chinese parent company and explore the Dutch market.
Salim Alassad fled the war in Syria and is organizing a meeting in Reading Room West for other Syrian refugees.