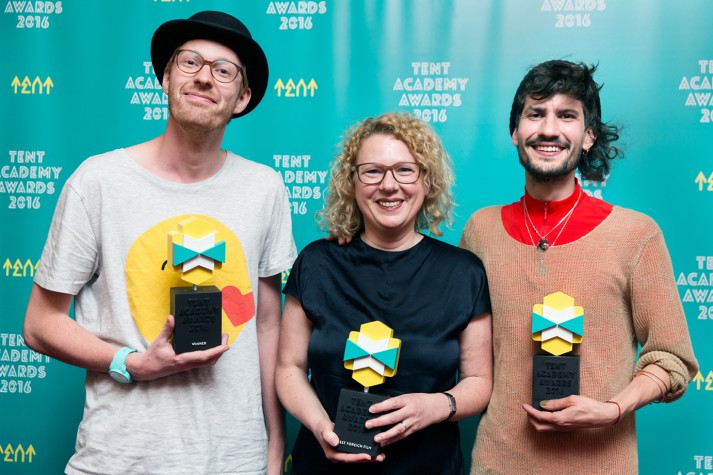 TAA 2016
The King of Madness from Michiel Ubels won the TAA 2016. The film is about Patrick, whose life could use some excitement. He starts making voyeuristic home videos. The film refers to our constant urge to show ourselves and to always be 'on', both in reality and on the screen. The jury was impressed by the experimental way in which Ubels portrays the main character Patrick. Ubels plays with the boundary between fiction and documentary, shows a great sense of humor in the way he uses different formats and experiments with the use of rhythm in the visual and verbal field. "He has a refreshing perspective on editing that reflects our fragmented and layered reality." Michiel Ubels graduated with his film The King of Madness at the Academy of Fine Arts in Maastricht and won a residency at Atelier Mondial, Basel in Switzerland and a working budget.

Best Foreign Film Award 2016
Millimeterle from Pascal Reinmann won the Best Foreign Film Award. The fifteen-minute film shows the sexual development of adolescent boys and the violence that can arise from peer pressure. The jury praised the visual language of the film with which Reinmann manages to convey a claustrophobic feeling. Reinmann also shows great skill and sensitivity in directing the young actors. "It is a convincing portrait of a joint effort, in which Reinmann had to win the trust of the young players." Pascal Reinmann graduated from the Hochschule der Künste in Zurich and won a residency at Het Wilde Weten in Rotterdam together with a working budget.

TAA Audience Award 2016
Giovanni Carmine, director of Kunst Halle Sankt Gallen, presented the audience award to Dinu Comendant, the nominee of the Royal Academy of Visual Arts in The Hague. His stop-motion film The Walking Thinker was named the favorite of the audience.

All nominated films can be seen in an exhibition at TENT up to and including September 18.