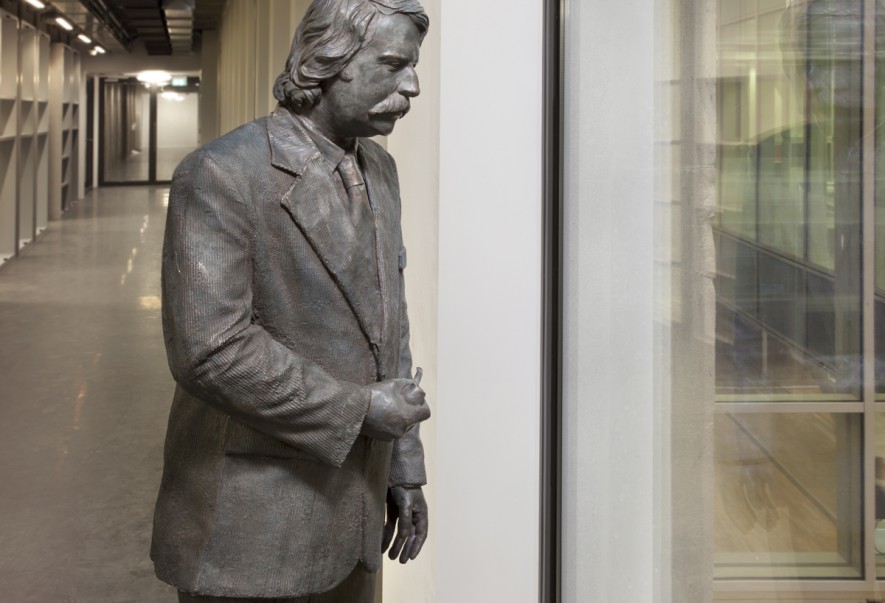 On Saturday, November 21, the day on which André van der Louw was installed in 1974 as mayor of Rotterdam, a new work by Herman Lamers was unveiled as a tribute to the former mayor. The statue of Herman Lamers has been placed in the Timmerhuis (to be delivered). After 11 December, the Timmerhuis is open to the public and the work of Lamers can be viewed by everyone.

Sandra Smets wrote a text commissioned by BKOR about the way Herman Lamers works, and about his tribute to André van der Louw: “All in all, the image is an intriguing result for Van der Louw in an unexpected place. Designed for and with the location, the image can only function there, in that sense incomparable with the classical bronze figuration to which Lamers refers. ”

Van der Louw (1933 - 2005) was a Dutch politician and director, who became mayor of Rotterdam in 1974; he stayed that until 1981. Van der Louw was an accessible and beloved mayor and many people remember him.

The Tribute André van der Louw foundation worked closely with BKOR (a program from CBK Rotterdam). BKOR asked visual artist Herman Lamers for this assignment, because his work mostly focuses on the context and location of an assignment. Lamers' work runs from figurative to abstract spatial, and abstraction, realism and poetry often go together in both form and material choice. Previously, Lamers made the Giant of Rotterdam en the angel in Zwolle.

With special thanks to
Foundation for the promotion of Volkskracht
Ph. Verhagen Foundation
Feijenoord NV stadium
Rotterdam Bankers' Association
Labour Party
Port of Rotterdam Authority
Municipality of Rotterdam
Arcadis
Tribute André van der Louw and many other companies and private donors who make this project possible.