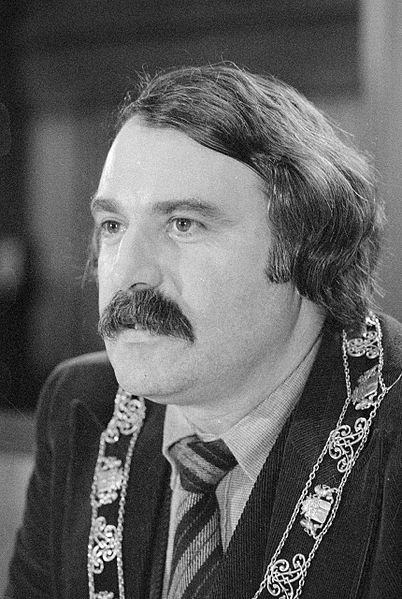 André van der Louw
André van der Louw (The Hague, 9 August 1933 - Scheveningen, 20 October 2005) was a Dutch politician and director. In 1974 he became mayor of Rotterdam and remained that until 1981. Van der Louw was an accessible and beloved mayor and many people remember him. At the age of 16 he became a member of the PvdA. He started his career at the Hague Institute for Folk Development, then worked from 1957 to 1971 as press officer at VARA and in 1965 he became editor of the youth magazine Hitweek. In 1974 he became mayor of Rotterdam. In 1981 he stopped and became minister of Culture, Recreation and Social Work (CRM).

Unveiling street sign
Already in 2008 came the request to name a street after André van der Louw. Various locations have been investigated and ultimately the Verlengde Willemsbrug has emerged as the best location. This location was chosen primarily because of the view of the Wijnhaven from the bridge. The Salvador Allende center was located at the Wijnhaven at the time. Van der Louw was chairman of that. Saskia Stuiveling unveils the street sign together with Naomi van der Louw and Annabel van der Louw (grandchildren of André van der Louw).

Unveiling image in the Timmerhuis
The development of a work of art about André van der Louw is an initiative of the Tribute André van der Louw Foundation, which has collected the necessary resources for this. The foundation's board consists of: Hans Kombrink, Jacqueline de Jong secretary / treasurer, Jan Cees van Duin, Nico van Eck, Koos van der Steenhoven. The foundation worked closely with CBK Rotterdam that helped make the realization possible. Herman Lamers, known for the Reus van Rotterdam, is the creator of the artwork. In addition, the foundation also focuses on the creation of a TV production about Van der Louw. RTV Rijnmond broadcasted the TV production on 21 October.

Together with grandchildren Carmen, Milan and Lucas van der Louw, Mrs. Wil van der Louw (sister of André van der Louw) reveals the statue in the Timmerhuis. Prior to the unveiling, there is a speech by Hans Krombrink. Siebe Thissen, head of BKOR; a program by CBK Rotterdam, and Herman Lamers will briefly discuss the creation of the image.

From December 11, after the opening of the Timmerhuis, the statue can be seen from the lobby of the building.

Symposium
The symposium takes place in the Burgerzaal of the Rotterdam city hall. The symposium is dedicated to Van der Louw and his role as mayor. It is also about the role of mayors in general.

Paul van der Laar acts as a discussion leader. The program is illustrated with excerpts from the documentary about André van der Louw. Finally, we consider the role of mayors in the present time compared to Van der Louw's time. What made André van der Louw unique? How does Mayor Aboutaleb see this and what do young people think? These and a few other questions are central during the symposium. The symposium is only open to invited guests; CBK Rotterdam will report on this on this website.

1. Promoting the creation of a physical image and an image biography by André van der Louw

2. Contributing to the aforementioned image being given a place in a publicly accessible space and furthermore everything that is directly or indirectly related to this, all in the broadest sense of the word, provided that it is in the public interest