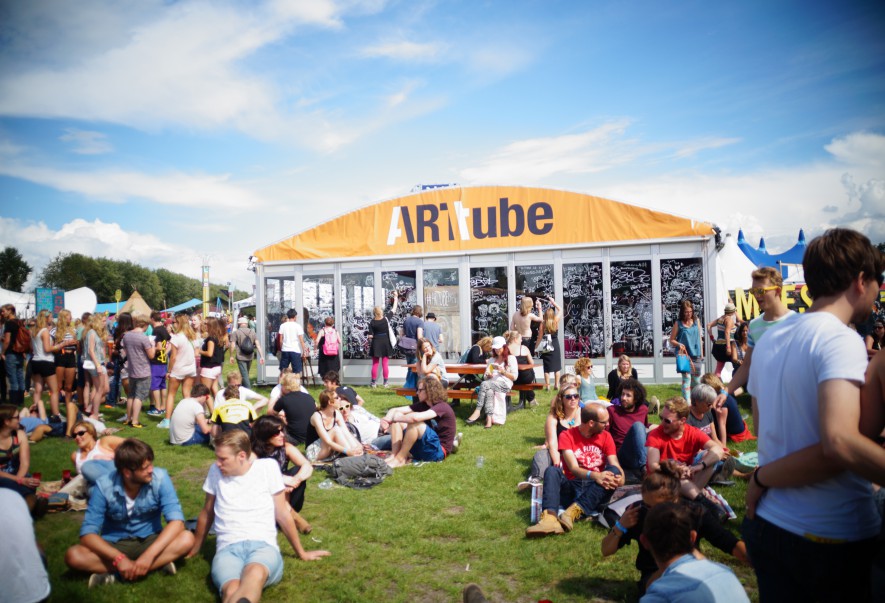 ARTtube is coming to you this summer

ARTtube is available offline at Lowlands

Eighteen museums and art institutions, including CBK Rotterdam, bring art, design and more to the most famous festival in the Netherlands this summer. ARTtube presents the best online art and design videos in the Pop Up Cinema at Lowlands, creative festival-goers can make animations, become disguised as part of a work of art or 'trip' with museum directors.
All museums affiliated with ARTtube are joining forces again this year for this unmissable event.

After a successful first edition in 2014, ARTtube is again at Lowlands this year in an even bigger tent. The video channel for art and design not only wants to bring the collections of museums together for the public, but also to introduce the public offline to the various art collections. ARTtube offers a varied film and workshop program during Lowlands in the tent of over 200 square meters.

The ARTtube Pop Up Cinema is a relaxed cinema with the most impressive and current films from the museums.

Throughout the festival, the audience can get creative with making animation films about famous works of art by, among others, Jeroen Bosch, Johannes Vermeer, Mondriaan and Malevich.
Artist collective The Cardboarders alternates three forms of animation, from life size stop motion to a 'combined animation' on the Wall of Frame. The animations made are immediately shown on screens in and around the tent.

Museum directors and curators give flash lectures at various times during the festival in the ARTtube tent. They zoom in 15 minutes on their favorite artwork. Visitors receive valuable inside information about artworks.

Next to the ARTtube tent is the huge LED screen from Dropstuff. Festival goers can be photographed here in a life-size composition, as part of a work of art. They literally place themselves in a painting. With the help of costumes and a make-up artist, visitors merge with masterpieces. The photos can be seen on the Dropstuff screen and are shared via Facebook.