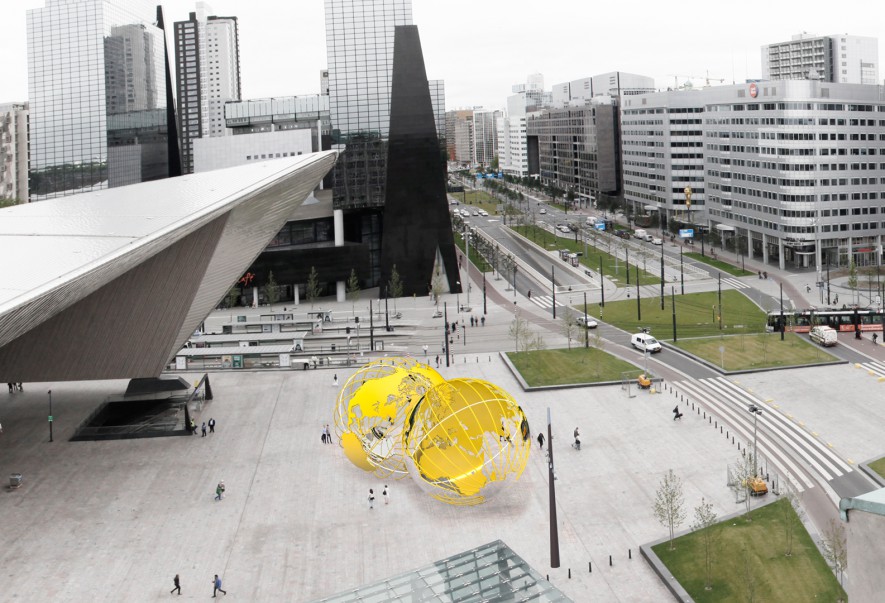 The Stationsplein at Rotterdam Central will get a new work of art. The De Bruin Committee compiled for this occasion selected the Kissing Earth design by the Danish / Icelandic artist Olafur Eliasson. His sketch design consists of two world globes, touching each other at the location of Rotterdam. The municipality of Rotterdam and the Center for Visual Arts (CBK) Rotterdam announced this together with the De Bruin Commission today. 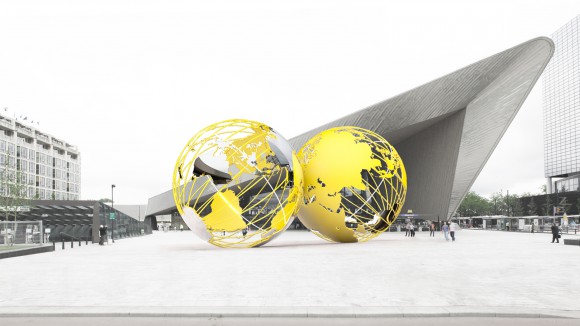 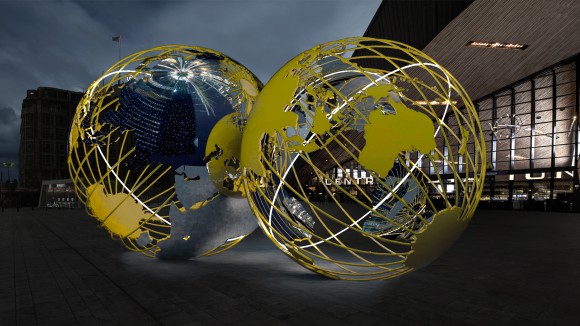 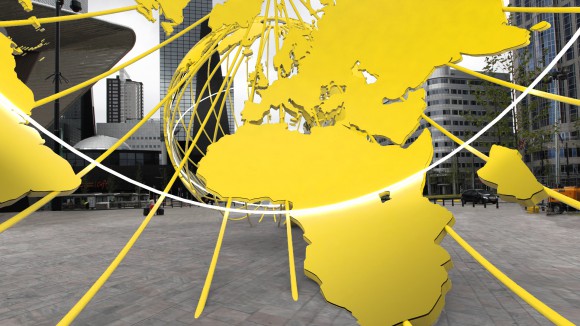 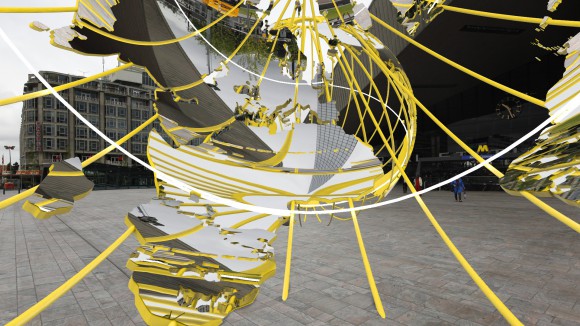 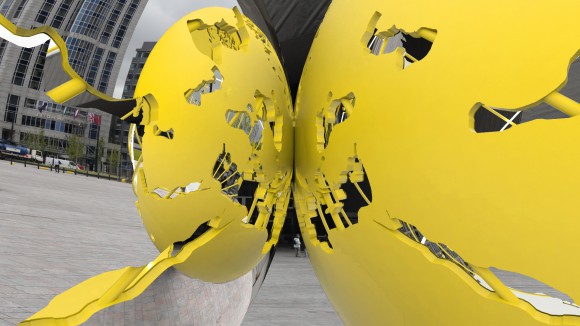 Eliasson is honored that his proposal has been selected: “I am looking forward to making a work for Stationsplein. I see the square as a perfect location to find out what it means to share a space. In my work Kissing Earth, the movements of the traffic and the people on the square are integrated, so that a dynamic experience of public space is created. Kissing Earth is therefore about the question: How do we make a connection between our local environment and global issues? ”

Olafur Eliasson became world famous with his monumental installation The Weather Project at Tate Modern in 2003. He shows his impressive installations all over the world.

A special committee, set up in 2013 by the former alderman for Art and Culture, selected Eliasson's proposal. The committee consists of: Cees de Bruin (chair), Adriaan Geuze (from West 8 Urban Design & Landscape Architecture and responsible for the design of the outdoor space of Rotterdam Central), Jaap Guldemond (head of exhibitions at the EYE Film Institute Netherlands and chair of Sculpture International Rotterdam ), Els van Odijk (director of the Rijksakademie) and Karel Schampers (former director of Frans Hals Museum).

The De Bruin committee unanimously opted for Eliasson's proposal. Eliasson is now instructed to work out the sketch design into a definitive design. Cees de Bruin: "The work of Eliasson has international allure and is a striking addition to the unique international sculpture collection of the city of Rotterdam." As an expert in the field of art in public spaces, the CBK Rotterdam plays a coordinating role in production himself. The expectation is that Kissing Earth will be realized in the fall of 2015.

The selection procedure for the work of art could be started after the renovation of the Central Station and the station area was completed. The Central Station has been completely redesigned between 2009 and 2014 to a design by the architectural combination Team CS. The new 13 station was officially opened by King Willem Alexander on 2014 March. With 110.000 travelers a day, Rotterdam Central processes as many travelers as Schiphol Airport.

The Danish / Icelandic artist Olafur Eliasson comes to Rotterdam on Tuesday 18 August to make a test setup for the artwork in the morning Kissing Earth on the Stationsplein.

Last year the De Bruin Committee selected the sketch design by artist Olafur Eliasson for a work of art on Stationsplein. Work Kissing Earth consists of the framework of two large world globes, which touch each other at the location of Rotterdam.

When developing a work of art of this size and significance, Eliasson carries out a number of feasibility studies in the field of spatial integration, technical and budgetary aspects. During the test setup, which was canceled earlier due to strong wind, Eliasson and his team will make a model of the artwork with balloons. In contrast to the balloons, the artwork itself does become transparent. The test is intended to determine the size and position of the artwork on site and to assess how the final work will relate to the square, the station, the city, and the passers-by. The insights from the test set-up help the artist to develop the final design. Eliasson emphasizes that any changes due to artistic or practical considerations will always be within the limits of the original proposal:

Eliasson: “Since Kissing Earth celebrating mutual solidarity and global awareness, I cannot think of a better location for this work of art than Stationsplein for Rotterdam Central, the gateway to this bustling, international city. It is a prominent public space, full of travelers and passers-by from all over the world - the perfect place to imagine what it means to share space; what it means for a space to be public and democratic. "

To realize a work of art of this ambition level, Rotterdam is looking for public-private partnerships for financing. The total picture of all costs is known in the autumn and the definitive fundraising can start. The Institute is expected to take a final decision early next year on the assignment for the realization of the work of art. After obtaining permits, manufacture and transport, the artwork can be placed in the course of the autumn of 2016.

About Olafur Eliasson:
Olafur Eliasson (born in 1967) is a Danish artist of Icelandic descent who lives and works in Copenhagen and Berlin. His work includes installations, sculptures, photography and film. His studio in Berlin, founded in 1995, consists of around seventy architects, artisans and art historians.