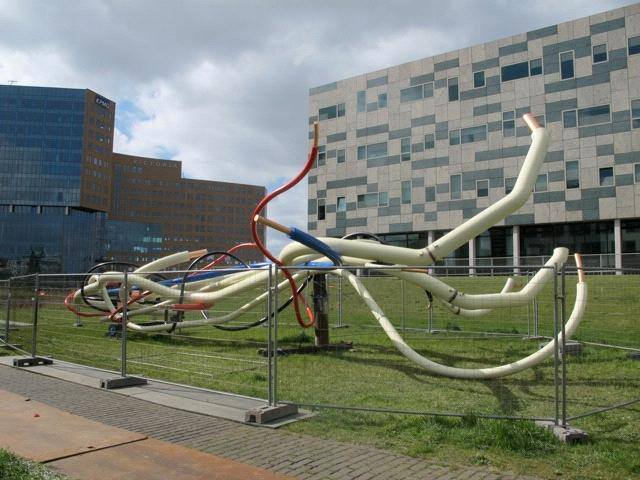 On Friday, April 18, a new work of art was placed in the water feature on the Brainpark business park between Rotterdam and Capelle aan den IJssel: the steel work of art IT from Marcel Kronenburg. The image already has a nickname - coined by the artist himself; The Swamp Thing.

This summer the work will be festively and officially unveiled.

The Fascinatio district is based on the fantasy book Wonderwind by Tom Manders and deals with the themes of security, wonder and surprise. Designer Jan Konings was commissioned by the CBK Rotterdam to establish a connection with art between the Capel district of Fascinatio and the adjacent business park. That resulted in the vision: art as an infill attraction.

For the artwork in the adjacent office park Brainpark III, Marcel Kronenburg was inspired by a completely different fantasy book, adding the theme of 'tension'.

“Brainpark III has been beautifully designed but still looks a bit more unkind, less secure. This is also noticeable physically: large buildings, wind that blows sharply past the buildings. I therefore decided to base my design for Brainpark on a horror comic The Swamp Thing. With that, I was able to give shape to a counterpart to security: alienation, uneasiness and an uncanny feeling. ”

The horror comic The Swamp Thing is about an indomitable 'super natural' who avenges the injustice that nature is being harmed by man. In Brainpark III it is not nature but information technology that is untamable. The cables and pipes have come to life in the pond of Brainpark III. Something with tentacles and its own brain lives in the pond of the Brainpark.

Read the article 'Art as an undeniable link in public space' (Kaat, summer 2010)