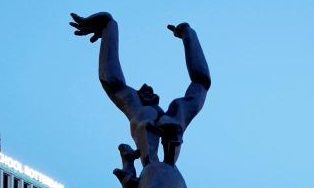 View our Zadkine file on the website of Sculpture International Rotterdam.

Below you will find a chronological overview of announcements regarding the investigation initiated by CBK Rotterdam / SIR into the possible relocation of De Verwoeste Stad:

It was previously announced that former police chief Aad Meijboom will chair the committee. The committee will also consist of: Mai Elmar, Sjarel Ex, Gyz La Rivière and Henk Oosterling. Dees Linders, head of SIR, is the secretary of the committee. The advice of the Meijboom Committee is expected at the end of March 2014.
The Meijboom Committee has a broad composition and consists of members who are each involved in the city of Rotterdam. Mai Elmar is director of Cruise Port Rotterdam and was previously Chief Marketing Officer. Art historian Sjarel Ex has been the director of Museum Boijmans Van Beuningen since 2004. As a visual artist, Gyz La Rivière made several publications about Rotterdam, among other things. Philosopher Henk Oosterling teaches philosophy for People and Culture at the Faculty of Philosophy at Erasmus University Rotterdam.

The substantive analysis of the desirability and possibility of relocating De Verwoeste Stad will be made on the basis of a number of interviews that will highlight a number of aspects: copyright and legal, urban development, artistic, historical / sociological and technical / financial.

- Copyright: who manages the copyright on Zadkine's Destroyed City and what do the heirs / beneficiaries think about a possible relocation to Rotterdam Central?

- Artistic: are there any artistic objections to the current location of the statue on 1940 square? Are there artistic arguments against or arguments for moving the image to Rotterdam Central?

- Historical / sociological: is moving the image desirable from a historical and urban sociological point of view? And what role do image and location play in commemorating the Second World War? Can a monument like De Verwoeste Stad be relocated and what consequences does that have for collective memory?

- Technical / financial: does the current condition of the image allow for a possible relocation, is placement on Stationsplein technically possible and what costs are associated with such a company?

Former police chief Aad Meijboom (62) will be the chairman of the advisory committee that is considering the possible relocation of the statue De Verwoeste Stad from Ossip Zadkine to Stationsplein. Ove Lucas, director Center for Visual Arts Rotterdam: "He is someone who is above the parties."

At the request of the B&W College in Rotterdam, CBK Rotterdam / Sculpture International Rotterdam will conduct an integrated investigation into the desirability and feasibility of the proposed relocation of The Destroyed City from Ossip Zadkine from Plein 1940 to the square in front of the new Rotterdam Central station. At the end of March / beginning of April the committee will advise alderman Laan (VVD, culture).

In addition, the CBK Rotterdam is considering having a public survey conducted on the question of how 'the Rotterdammer' thinks about this issue.

Advice: Zadkine must stay The Commission that considered whether or not to relocate the Zadkine advises that the statue should remain on Square 1940.