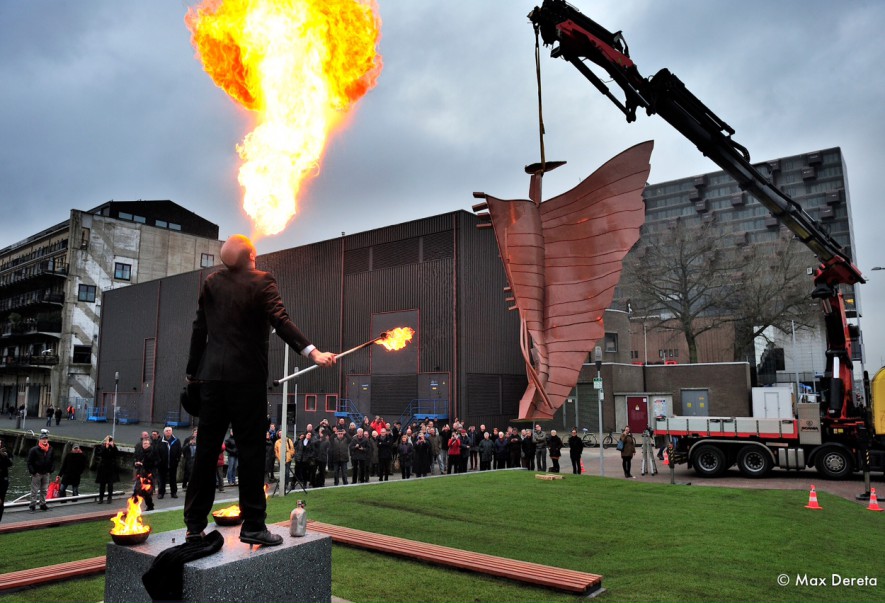 The Phoenix from Ittmann rises again

Together with the municipality of Rotterdam and the residents' association of the Herder building, the Rotterdam Center for Visual Arts participates in the redesign of the Zevenhemell location; a new place to stay on St Jobsweg. This park is also the new place for De Phoenix (1966) by visual artist Hans Ittmann (1914-1972).
Originally the statue was designed for the Jan Prinsschool on the Blaak, which, however, had to make way for the construction of the Markthal Rotterdam. There was no room for the image in the new building of the school. And with that, one of the many special post-war works of art that Rotterdam is rich in threatened to disappear permanently from the streets.

The resurrection of the Phoenix
The Phoenix, or Firebird, expressed the resurrection or rebirth of post-war Rotterdam. Such a rebirth is also visible today in the Lloyd Quarter: the former port area is developing into a residential area. The four-meter-high steel sculpture is a welcome addition to the monumental architecture that is so characteristic of this place. The image is striking, cool and historic, but does not obstruct the view of the water in its emphatic presence. It gives a powerful appearance to the park and the entrance to the Lloyd Quarter.

Unveiling of the Phoenix program
On Tuesday 17 December last, the restored phoenix was placed on its pedestal by the Van Campenhout company. Karen Bebelaar (portfolio holder of the Delfshaven district) will announce the relocation in the presence of the parties involved.

Hans Ittmann
The Amsterdam artist Hans Ittmann (1914-1972) decided one day before his notary exam in 1941 that he would rather become a visual artist. This decision would lead to a very diverse oeuvre of reliefs, ceramic small plastic and free sculptures. Shortly after the war, Ittmann traveled to Paris. He lived here from a scholarship from the French government and became apprenticed to Ossip Zadkine. Like many contemporaries, Ittmann investigated various fields: as a painter, draftsman, graphic artist and sculptor. His design The Phoenix was specially commissioned by architect Kloos and the Van Tijen-Boom-Posno office to be designed for the school complex at the Jan Prinsschool and placed in 1966.

The realization was made possible by the municipality of Rotterdam, the borough of Delfshaven and the Center for Visual Arts Rotterdam.