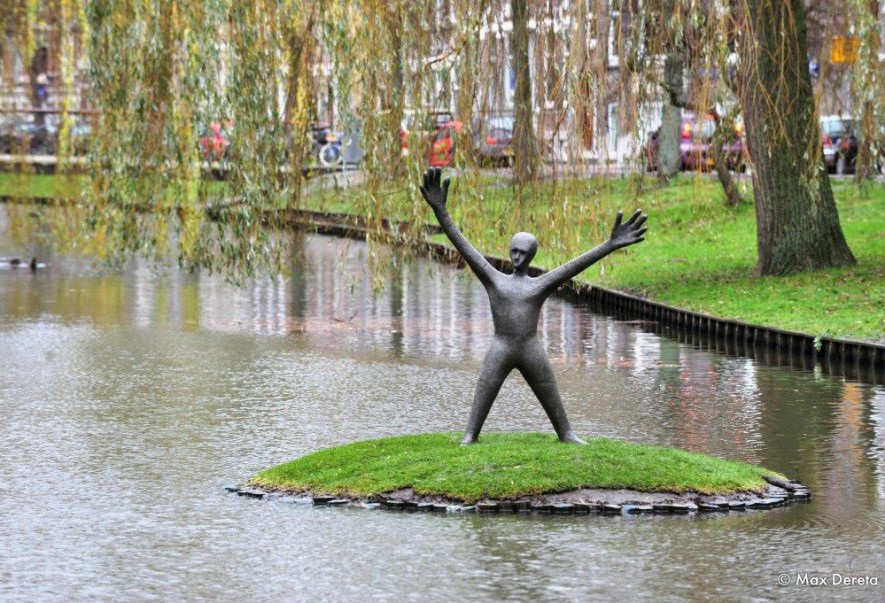 On the occasion of the unveiling of new images of Henk Visch and of Guide Marsille and Onno Poiesz at the Spoorsingel on 6 December 2013 Sandra Smets read the column below:

Just as Paris has its boulevards and Amsterdam its canals, Rotterdam has its canals. It was 1842 when an ambitious Rotterdam architect, Willem Nicolaas Rose, designed these webbing as a grand plan, together with his colleague De Jong. Just as Paris had its boulevards partly designed to facilitate army troops, the Rotterdam singles were a reaction to the cholera epidemic of ten years earlier. The winding old town in the overcrowded North and Crooswijk was stuffy and dirty. Rose drew a family of waterways that created air in the city plan. Via North they meander to Crooswijk. Hygiene and water drainage were the main motives for this design, but the architects were not unaware of any sense of beauty. They were inspired by the English landscape gardens, which in turn were inspired by art. That was where the word picturesque came into existence. In a sense, quite indirectly, art was therefore present in that early design phase.

But especially the canals were ultramodern with novelties such as sidewalks and street lamps, yet it is that picturesque quality that makes us so attached to it. So much so that when the municipality of Rotterdam put the spades in the lawns at the end of the last century for a major makeover, those old nineteenth-century design ideas would be brought back. Back to the time of Rose. This makes the canals a kind of time machine that seems to encourage urbanites to slow down, to take a step back in time, something that is emphasized by the art that has now arisen. On the Spoorsingel a seat has been furnished by Guido Marsille with yellow-brown trunks of terrazzo ceramic, a bit like in the nineteenth century also industrial novelties with papier mache were disguised as something familiar. Anyone who looks at that material in Marsille's benches, with red glass shards and mother-of-pearl, has already sat down and sees the sculptures that seem to have been casually placed there. They are a stone and boots made by Onno Poiesz. The stone is like a rough gem for the ladies who lived here during the belle epoque. Boots belonged to the workmen who lived in the lower rooms of those stately buildings on these canals. The family lived upstairs, among the staff who served the tea in the upstairs room and brought coals and brought the carriage forward. A pair of sturdy boots was essential.

Those times are over and only the tall trees that have been standing along the canals for generations help to remember that the world was once different, aided by these new images of remembrance. Class differences still exist, certainly in Rotterdam, but the upper and lower worlds have become one. Today, the class differences are in the meritocracy, success is a social duty and living on the canals - the Rotterdam variant of the Amsterdam canals - bears witness to this. Although it is not said that those old houses do not leak or are crooked, artist Henk Visch teased when he presented the residents there his artwork: a waving human figure on his own island, in the Spoorsingel. Tirelessly, he stands there waving goodbye to the people who run in and out of the station, and who by no means all have time to stand still and think about the webbing or the passing of time.

But there is a big difference with Rose's time. At that time there was no art with the canals. The gardeners can refer to earlier designs, the artists must (or may) make up everything themselves. I found the building board touching that stood here for two years between the canals. It had a beautiful artist impression on which the canals had received a wide platform and also a work of art. That was a statue of a huddled man, who was somewhat uncertain about his pedestal. After all, to good use, a budget is made available for art during construction work. In this case that is extra nice because a lot of money has disappeared underground, in the form of cabling, sewage - invisible. Art is the most visible pinnacle of that work. Five canals have been tackled in recent years and just like many homeowners are now renovating old buildings, scraping scrap metal and stone strips away, the municipality also wanted to restore the canals to their original state. Modernisations have been reversed. These days we want authenticity. Back to the nineteenth century, back to the time of Rose.

Fifteen years of work has now been done on the canals and related art, with even that short period of time falling apart. Initially it was an art committee that determined the art, nowadays residents have a lot of say. The image of Klaas Gubbels has even been purely an initiative of local residents. But furthermore that art seems to have a fairly constant idea of ​​the five singles. Fifteen years ago, seats were also installed at the first canals and works of art that are about time and about the past. Just as the canals together form a family, the works of art are also a family, a route to stroll, just to mention something nineteenth-century. They alternate, sitting areas to look at the water and then a sculpture that directs the gaze. In that sense, offering viewing frames is comparable to last century's land art or conceptual art, as Stanley Brouwn did say "imagine that here is a square of those and those dimensions." For example, this art says 'imagine that this is the same view as in the 19 century'. And then our imagination does the rest. Ultimately, that is the way in which this 21e century art seeks the connection with the 19e century, and that in between all demands of revetment and walker permeability.