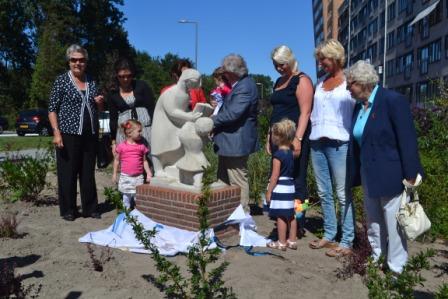 The municipality of Rotterdam has approximately 800 artworks in public spaces. Many works of art were realized between 1960 and 1985 for the construction of new municipal buildings within the framework of the percentage scheme. The relevant municipal service became responsible for the maintenance of the work. However, due to demolition, relocation, merger or privatization, many images have disappeared or become orphans: schools are being demolished, municipal hospitals are becoming autonomous, municipal corporations and energy companies are becoming private companies, often at new locations.

Collect / Reorder / Re-evaluate
The Center for Visual Arts (CBK) endeavors to give a number of special images a new home and is looking for new owners who want to take care of one or more works of art. It is important that the images remain publicly accessible.

The load carrier The relocation of 'de Lastdrager' is celebrated on November 13. The statue is revealed by Mayor Aboutaleb.
Reconstruction Dick Elffers artwork revealed The primordial world of the animal compared to the synthetic world of Dick Elffers from 1960 is revealed at its new location in Hoogvliet.