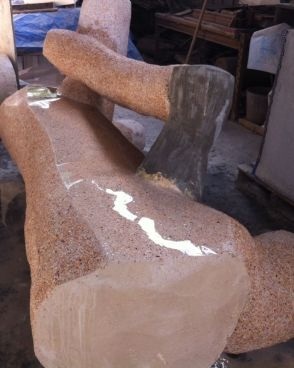 New artworks have regularly appeared on and in the Rotterdam singles. At the Provenierssingel, Klaas Gubbels kicked off in 2011 with the image 'A swan in the distance', after which designer Guido Marsille and visual artist Onno Poiesz designed a place for the Spoorsingel with benches and trouvés. The terrazzo benches were made in the famous workshop of the Zuliani company. Last summer, on 31 July last, the benches were placed, directly opposite the footbridge over the Spoorsingel. The accompanying images followed this week. The art project along the canals - the canal plan - will be completed in December with an image of Henk Visch in the head of the Spoorsingel that was created in consultation with residents.

Title: Kryptonian Ice Lake
The title of the work "Kryptonian Ice Lake" refers to the comic hero Superman. Krypton is the planet he comes from today and the planet he has his powers from. The comic appeals to the imagination; the sculptures by Onno Poiesz do exactly the same. As if parts of the unknown planet ended up on Earth one night. 'Ice Lake' refers to the painting of the same name by Casper David Friederich, an important work from the Romantic period.

Single plan
The 19e century single family of Rotterdam will be completely restored, refurbished and refurbished by Rotterdam City Development. This is currently happening with Spoor- and Provenierssingel on the north side of Central Station. Art assignments are part of this long-term project, called the Singelplan. The Singel Plan, which started in February 2001, states that the grandeur of the canals from the last century must be restored: clean water with better flow, restoration of banks and embankments, beautifully landscaped greenery with stately trees and walking paths with lighting. And much attention to staying and living on the canals. The CBK Rotterdam commissioned 2001 to develop an art plan for the canals and canals of Rotterdam.

Spoorsingel
The Spoorsingel is located on the north side of the Central Station where the modern, new station rises and connects to the typical 19eeuwed residential area of ​​the Provenierswijk. The Spoorsingel is a real city promenade for residents, walkers and travelers. Now that the park-like allure of the Spoorsingel is back, a nice place to sit for people who follow the path along the canal or cross it daily is not missing.

The makers
Guido Marsille (Boskoop, 1967) studied architectural design at the AKI, Academy of Art and Industry, in Enschede. He then woke up with various visual artists, designers and architects. In 2004 he started Buromarsille from where he works on many projects for both the public indoor and outdoor space. Onno Poiesz lives and works in Rotterdam and graduated in 2000 from the Willem de Kooning Academy. Transience forms the basis of his work. He processes hidden messages in an endearing envelope that refer to real or virtual events that he encounters in magazines or on TV. He makes a lot of use of found objects and toys that are converted into a different material.

The realization of the work of Guido Marsille and Onno Poiesz was made possible in part by the District Municipality of Noord, Center for Visual Arts Rotterdam and the municipality of Rotterdam.