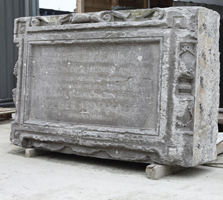 The Wilhelminasteen - in memory of things to come

Is Feyenoord champion? Is meat still eaten? IIs there censorship? Which professions are extinct? When did Amalia become queen? Does Rotterdam still exist?

Just a selection 1000 questions to the future, part of De Wilhelminasteen, a work of art by Arnoud Holleman commissioned by the Center for Visual Arts and the Municipality of Rotterdam.

Sealing time capsule
The Wilhelminasteen is a forgotten Rotterdam cultural heritage from the year 1891. It is a stone of 3.000 kilo, that on May 30th 2013 has been given a new place in the quay wall of the Wilhelminapier. The Wilhelminasteen was unveiled by the 10-year-old Queen Wilhelmina. As part of the ceremony, she placed a small time capsule in the stone, which was found in 1976 when the stone was removed. This fact is the starting point for the new situation, because once again a time capsule will be sealed, which will only be opened again in the year 2135.

Indestructible letter garlands
Arnoud Holleman has made a new design in which not only is the Wilhelminasteen placed back in the quay wall, but also an exact casting can be seen right next to it. Behind the new stone he has created space for a much larger time capsule than that of Wilhelmina at the time.

Holleman: “For the contents of the capsule, the 1000 project for the future was conceived. Rotterdammers are invited to put a burning question to the future, so ask the residents of the city in the year 2135. From the questions, indestructible letter garlands are produced that all go into the capsule. "

Website
Via from website www.wilhelminasteen.nl that supervises the multimedia project, everyone can find information about De Wilhelminasteen and the latest news.

Facebook
If you liked the page of De Wilhelminasteen on Facebook, you will stay up to date with the latest activities. There are posters available with questions about the future on the 1000. Interested? Then contact the CBK.

Wilhelminaday Rotterdammers bring an ode to the Wilhelminasteen and the capsule: remembering and forgetting go hand in hand.